The day started benignly enough-- a simple story on gasoline prices as we approach Memorial Day weekend.  My phone rang a little after 6 am.  There was a crash, a bad one, along Interstate 81 north in Wilkes-Barre Township.

Photographer Jason broke down our live shot location in Pittston Township and we headed south.  We found the crash scene quickly enough, but there was a major problem.  The we couldn't access the crash scene safely.  There was plenty of interstate between the wrecked tractor trailer and us.

Jason and I brainstormed for a moment.  We remembered a road, off Route 309, that cuts under the interstate, then snakes along it.  By the way, traffic on 309 was crawling because of the vehicles that jumped off 81.  Thank you to the people who let us cut in front of them.

We found a pretty good spot.  Great view of the wrecked tractor trailer, with its wheels up.  We were out of everyone's way and it was possible to do live shots safely.

An aside:  highway crashes are our worst nightmare.  We have to get there and not get caught up in the traffic tangle.  We have to get video without putting ourselves in danger.  First responders already have their hands full.  We take great steps to avoid getting in their way. 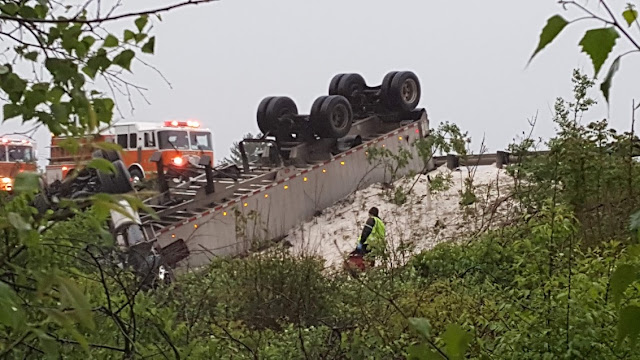 Jason had the live shot up and running quickly and efficiently.  There was enough time left to do a quick hit in Newswatch 16 This Morning.  It was a real drama.  It took about two and a half hours to cut the driver out of the wreckage.  We followed the progress during Good Morning America.

If highway crashes are our worst nightmare, rain is a close second.  One drop of water in the wrong place can put you out of business.  Jason kept the gear covered.  We didn't have a problem.  I wish I updated social media a bit more.  The station took care of most of it.  I really tried to avoid taking my phone out of my raincoat pocket.  The phone did get wet during my phone calls to the station.  It kept working.

The driver was finally rescued around 8:30 am.  We wrapped it up during the 8:56 am update, and it was back to the station.  My first stop was the make up room, where I used someone's hair dryer to dry my shirt.  My two coats are on chairs near my desk, getting some air.  My ball cap is being dried by the fan I keep on my desk.

My problems were minuscule compared to the issues faced by first responders, and of course the truck driver.  A truck, upside down, facing down an embankment.  A man trapped inside.  A steep slope.  Driving rain.  Mud everywhere.

I've covered a lot of crashes over the years.  This had to be one of the most challenging.
AT 12:00 AM