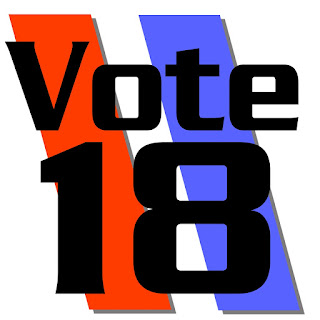 Like most of northeastern Pennsylvania, I'm carefully watching the race for U.S. congress in the new 8th district.  Republican John Chrin is facing off against Democrat Matt Cartwright.

So far, this race is by the book, and I hope we get more before the election.  If you take out the names, you can use the same commercials in every other congressional district in the country.  The Democrat accuses the Republican of favoring cuts in social security.  The Republican counters by denying all of it and adding the Democrat is a liberal who is hopelessly out of touch with his district.

As far as the race for governor goes, most polls show incumbent Democrat Tom Wolf with a comfortable lead over Republican challenger Scott Wagner.  The Republicans released a poll this week, showing the race is within the statistical margin of error.  In other words, a dead heat.  No one is really surprised the race has tightened.  That always happens in the days leading up to an election.  Dead heat?  Not so sure.  As always, look at all the polls.  Examine the methodology.  Average them out.

Governor Wolf did get it right during a stop in Luzerne County this week.  Turnout is key.  It always is.  Every election.

Recent history shows anything can happen.  At this time two years ago, no one expected Donald Trump to win Pennsylvania and take the White House.