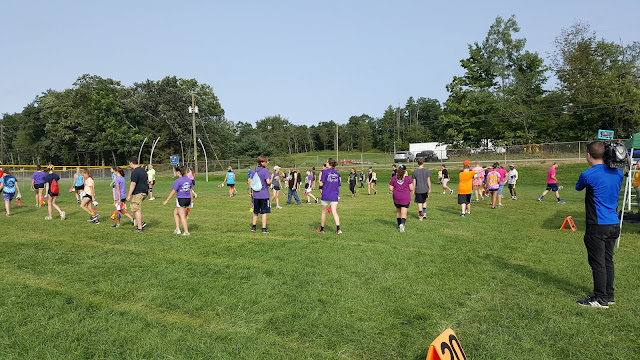 It was a sad story that brought me to Northwest Area Middle/High School Monday morning.  A fire on the afternoon of the 18th damaged the school.

Photographer Erich, in the blue shirt on the right, and I were looking for angle to freshen up the story and make it interesting.  We found one.  This is the Northwest Area Rangers marching band, practicing on a field near the school, without their instruments.  Those were stored in the school when it burned, and no one was allowed to enter the building immediately after the fire.

As I said on Facebook, the kids and instructors were great, even stopping practice to allow Erich and I time to talk to the young musicians.  I think they appreciated the attention, and it was nice that we could show their perseverance.  High school bands don't receive nearly enough credit for their hard work and what they do.  It would be nice if we could show more of them, but there are limits to the amount of music we can put on the air because of fees from licensing companies.  It's a long story.

Regular blog readers will remember that I spent more than four years in the band.  I wasn't very good, and some changes meant an additional time commitment I wasn't prepared to tackle.  On top of that, I was constantly getting yanked out of a favorite science class for practice.  My path was clear.  Music wasn't in my future, and it was best that the band and I went our separate ways.  The respect for those who participate, and those who do it well, remains.

Good luck to my new friends from Northwest Area, and to all the young musicians during the football season.
AT 12:00 AM