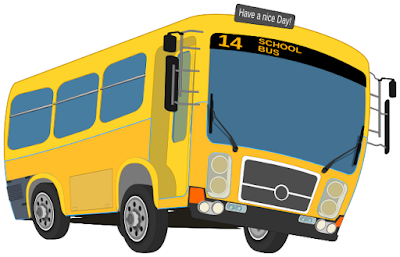 Is there anything noisier than a school bus on the first day of classes?  At least, that's the way it was when I was in school.  There were people you didn't see in a few months.  There was a lot of catching up to do.  if that wasn't enough, there was the excitement of new classes, and maybe even being in a different building.  I had classes in eight different structures during my 12 years.

I was wondering if things had changed, if that first day newness had worn off.  I was in school long before social media.  There's not much catching up to do if you;re Facebooking, Instagramming and Snapchatting all summer long.

After the newness wears off, the misery sets in.  I was at a red light during the last school year, and a bus passed perpendicular to me.  I never saw a more sad group of kids in my life-- and this was at the tail end of the school year..  I did like learning, but I didn't like school.  I suspect most others are in the same boat, or bus.

After the first couple of days, reality sets in.  the end of the school year seems so far, so very far away.  To a kid, it is.  As you grow a little older, you find the time flies by.  September and October can be tough.  There isn't much of a diversion, no extended days off.  then comes thanksgiving and Christmas.  January and February are more long hauls.  The light at the end of the tunnel appears in March.

Kids and parents, enjoy the ride.  These days will not last forever.
AT 12:00 AM