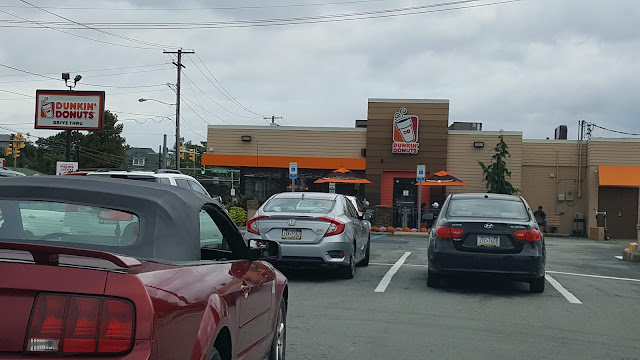 The company has been experimenting with, and toying with the idea for several months.  It made it official this week.  In January, Dunkin Donuts will drop the "donuts" from its name.

I cannot remember the last time I was in a store.  I'm not a coffee drinker.  Paying $2 for an iced tea that costs four cents to make doesn't thrill me.  I've had take out food on occasion.  They still make a fair donut and a good, if unauthentic, bagel.  Nice selection.  Most of the stores have given up 24 hour operation.  You might be lucky and find one on your nocturnal travels.

Dunkin Donuts says it's making the change because the bulk of its business these days is in drinks, not donuts.

There are places that make good donuts, if not better than Dunkin.  Some supermarket bakeries have really stepped up their game.  There are a couple big mini mart chains that do a great job.

Regular readers know I can become sentimental over the strangest things.  The building on Wyoming Avenue in Scranton is now a Subway.  Way back when, it was a Dunkin Donuts, one of the few in the area.  My father would take me there once in a while, getting seats at the long counter.  He'd have a coffee and a donut.  I'd have a hot chocolate and a donut.  We both would choose the same type, and I'm not sure if they still make them.  It was a plain cake donut with a little nub of extra dough that was supposed to keep your fingers out of the coffee while dunking.  The nub was irrelevant to me.  I wasn't a dunker-- but I really did love those donuts.  They had a crunchy, fried exterior, while remaining soft and moist in the middle.  Outstanding!

You can change the name.  You can replace the donuts.  You can't erase the memories of going out for a donut with your dad.
AT 12:00 AM