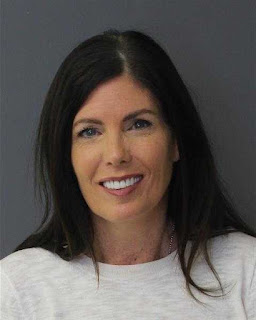 Above is former Pennsylvania Attorney General Kathleen Kane's Montgomery County booking photo.  It was taken yesterday-- the day she went to jail for leaking secret grand jury information to damage her opponents, and then lying about it.

The Lackawanna County native was the highest ranking law enforcement officer in the state.  She should have known better.

Kane's name was being kicked around for Pennsylvania governor and U.S. Senate.  I believe in redemption and second chances, but it's safe to say she will never be elected to anything ever again.

That probably is not a bad thing.

I would really know how this thing derailed so quickly.

Not ready for the job?  Not qualified?  Bad judgement?  Bad advice?  Naive?  Arrogant?

I hope one day Kathleen Kane will tell her story.  The people who voted her in to office deserve an explanation.
AT 12:00 AM