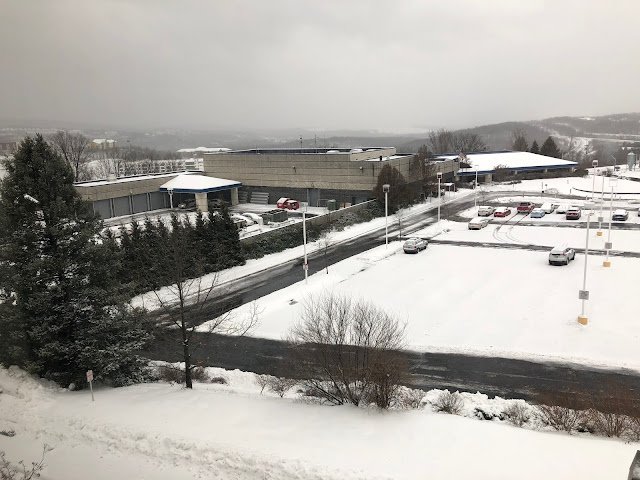 This is a shot of the WNEP building from Sunday morning.  The snow had stopped.  The rain had started.  the big chill was on the way, turning that heavy, wet snow into just about solid ice.

The photo was taken from the fourth floor of the hotel next door.  Yes, that's where I spent the weekend.  In 20.5 years at WNEP, it was only the second time I stayed in one of the adjacent hotels.  The first time was during the Blizzard of '17.

Here's how that latest stay came about.  I was tooling around on the internet Friday morning.  A private and well respected forecasting service raised the possibility, not the likelihood of two feet of snow.  My panic button was at the ready.  I went on the hotel web site and saw a notice that rooms were filling up fast.  A few clicks later, and I had a room for two nights.

My situation is different than most because I work funky hours.  The hotel management was kind enough to grant me an early check in, so I could get a few extra hours of sleep.  I took a second night because, according to the original forecast, it was supposed to be snowing hard on my drive home time.

Here is where experience pays off.  When I stayed there in March of 2017, the nightstand had a very nice alarm clock, but no radio.  I slept horribly.  I need my radio. I can't sleep with the television on.  Yes, I could have received audio from my phone, but I was having some wi fi issues.  This time, I came prepared with a trusty transistor.  Worked like a charm.  Great AM reception, and the radio stayed on for more than 12 hours on the same set of two AA batteries.  I was impressed.  Thank you Sony and Duracell.

I left my SUV in the WNEP parking lot, walking to the hotel and then back to the office.  It was really cool to be able to walk to work.  I needed to time it better because I arrived at the office way too early Saturday night and Monday morning.  The early Saturday night did give me time to have a nice dinner of newsroom pizza.

I can't say enough nice things about the hotel staff, but I hope it will be a very long time before my next stay.
AT 12:00 AM