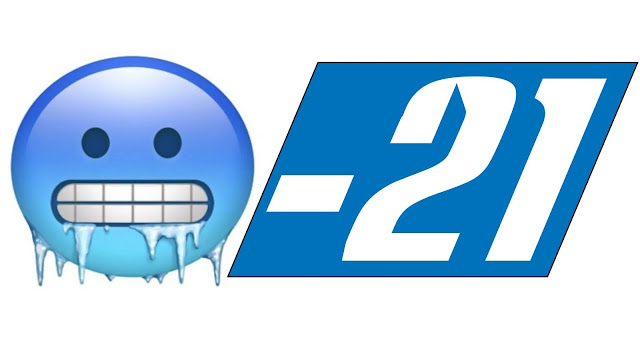 It was the coldest ever in the Scranton area.

I remember it well.

I was working the morning shift, "down the street" as we say in the business.  I was filling in for the usual morning reporter.  I had a 9 AM start back in those days.

Photographer Joe and I had a busy morning.  We talked to pro lifers before dawn, who were headed to Washington for their annual March for Life.  We talked to trash haulers.  They like it cold because garbage smells less in the cold.  We recorded Scranton mayor Jimmy Connors' appearance on "Imus in the Morning.  the big story of the day was a water main break on Penn Avenue, near the veterans' home in downtown Scranton.

We had several technical problems that day.  TV cables tend to get brittle when it hits 21 below zero, and the ends kept breaking off.  We had one cable left, but it was short.  In order to get the angle with the flowing water behind me, in my live shot, I had to stand in a snow bank up to my knees.

The morning broadcast ended.  Joe and I went back to the station to warm up for a few minutes, and it was time to figure out a story for our noon broadcast.  We just jumped in a truck and headed north to see what we could see.

We ran in to a farmer in a field, and plenty of cows.  Farming is a tough business when the weather is nice.  Imagine the difficulty when it's brutally cold.  The farmer told us that yes, cows can get frost bite, and they actually give more milk in the cold.  Cows eat more to keep their body temperature up, and that translates into increased milk output.

I was here at WNEP for the 10th anniversary of that frigid day.  I went back in to the archives to look at the stories from that day, and I retraced the steps of the WNEP reporters from 1994.  I found the heating oil salesman, who was busy beyond belief.  I also found the Honesdale letter carrier who suffered a frost bitten finger that day.

One of the major kicks of being in this business is having a front row seat to history.  It was a great view on January 21st of 1994, as long as you were bundled up.

It was a gutsy and stellar weekend for me.  I picked both road teams, both underdogs, and both won.

It will be a New England versus Los Angeles Super Bowl, and my thoughts on that will be in this space in the days to come.