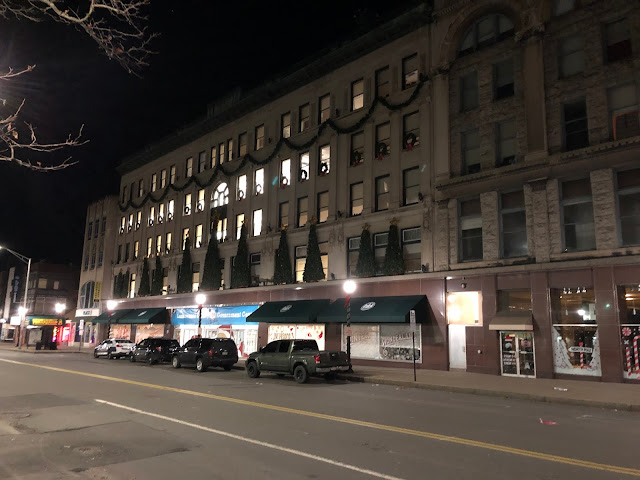 This is a picture of the Globe in Scranton I took early yesterday morning-- the day the Lackawanna County Commissioners held their first meeting here.

To get you up to speed, the county just spent $ 17 million to turn the empty store into government offices.  Offices and bureaus that were spread about the downtown will be in one central location.  It will be nice to see some activity in this block, even though it isn't for retail-- like it was in the old days.  I know the inside has been renovated, but let's work on the outside.  Downtown Scranton is very dark.  Let's light it up.

I hope it puts some things to rest, once and for all.

There were those who believed the building could one day house a department store again.  No.  Never, ever, ever, ever, ever.  Department stores are a dying breed.  As I write this, Sears/KMart is in danger of closing, and several other big names are struggling.  The Marketplace at Steamtown, just down the street, had ample space and it couldn't find anyone to fill it.

While we're in the never, ever, ever department...  forget about the old restaurant here coming back to life.  There will probably be a snack bar in the Globe one day, and that's it.  That's all this market can support.  There are plenty of other decent places out there-- locally owned, and chains, where you can grab a good meal.

Time will tell if the Globe was a good investment for the county, but you can't overlook one big fact.  If the county didn't grab the Globe, it likely would have been empty for a long, long, long time.
AT 12:00 AM