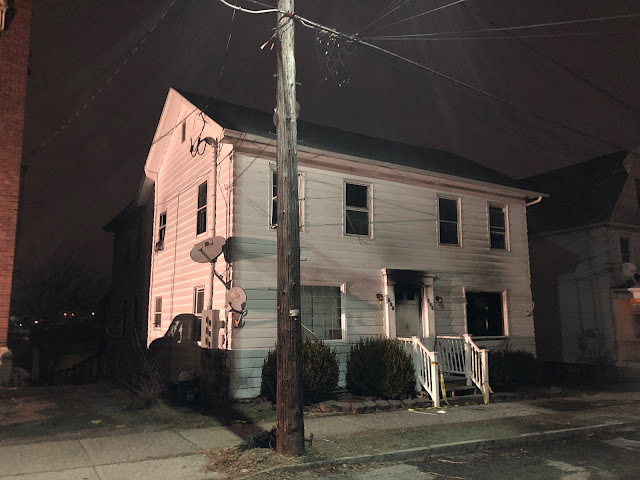 It all started a little after 2 Tuesday morning.  I wandered in to the office a few minutes because snow was in the forecast.  I allowed some extra time to breeze through Walmart for some essentials.  I was in and out in record time.

Shortly after I hit the newsroom, I heard the commotion-- fire on Scott Street in Wilkes-Barre, at least two hurt, Red Cross needed for multiple victims.

I summoned photographer Jason from one of the edit booths, and we headed south.  The Wilkes-Barre Fire Department did a great job in knocking down the flames quickly, but the damage was done.  An apartment building severely damaged, and eight people needed new places to stay.

The lead, or the lede as we old timers spell it, was two children being forced to jump from a second floor window, caught and helped by people below.  We quickly found one of the residents, who pointed out one of the heroes.  Interviews done.  Video shot.  A quick chat with the chief tied up the loose ends.  I called the producer and asked her to rearrange the lineup.  We had an excellent story.

Photographer Jason and I jumped back in the car and bolted back to the station.  I banged out a couple of stories in near record time.  Jason matched pictures to words, and we were in business.  We finished so quickly, photographer Corey and I were able to make it back to the scene for live reports during Newswatch 16 This Morning.  A nice wrap up was featured on our noon broadcast.