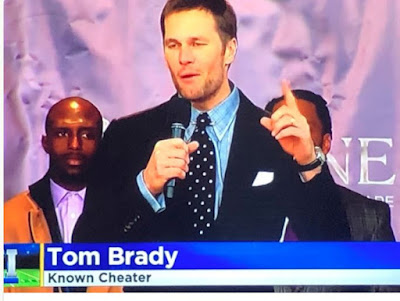 A producer for KDKA in Pittsburgh was fired last week for creating the graphic you see above.  Rather than note Tom Brady as "New England Patriots QB," the second line said "known cheater."

Whether or not it's true, people in this business, from the smallest towns to the major networks, need to keep their opinions to themselves.  So many have lost sight of that.  We are our own worst enemies.

Let's connect the dots.  KDKA is owned by CBS, a network that has the rights to AFC games, including the New England Patriots.  It was this year's Super Bowl network.  CBS and the NFL have a business relationship.  Would the punishment have been as harsh if that relationship did not exist?  I have a feeling the answer is no.  We will never know.

So, what would I have done if I was in KDKA management?  If the violator was a good employee with a clean record,  I might have ordered a long suspension.  If this was the latest in a string of infractions, there's a good chance I would have shown the man the door.

Would I hire the guy if his resume crossed my desk?  Tough to say without a meeting.  If he is repentant and admits this was a massive failure, possibly.  Judging from a recent story in one of the Pittsburgh newspapers, I don't detect a lot of remorse.

No matter how you look at it, this is something stupid that shouldn't have happened.
AT 12:00 AM