The Rest of the Story 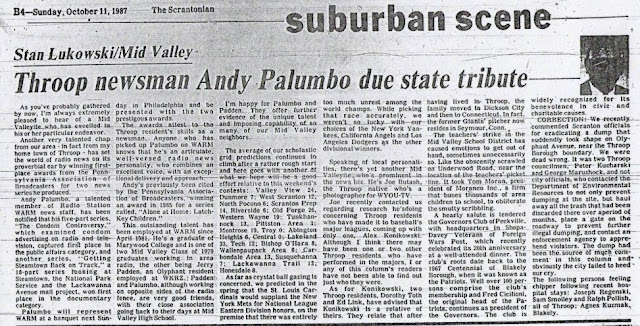 Old friend and Researcher to the Stars Joe Klapatch found this old newspaper column and posted it on my Facebook page.  It does deserve a bit of an explanation.

Stan Lukowski wrote a column on the mid valley for the old "Scrantonian" newspaper.  It was a must-read every Sunday.  Stan really knew what was going on in his communities, and he is dearly missed.  His words that day meant so much to my family.

Anyway, Stan learned I was receiving a couple of radio awards at the upcoming 1987 Pennsylvania Association of Broadcasters convention.  WARM's news director, Jerry Heller, made the entries.  I was the winner and he allowed me to pick them up at the Philadelphia convention, including a night at a really nice hotel.

Let me refresh you on my "awards" policy.  I was humbled that Jerry thought my stuff was good enough to enter.  I didn't enter anything back then.  I still don't.  I know a lot of people enjoy the attention and the peer recognition.  The validation.  That's great, and I have no problem with it.  I can live without it.  My work speaks for itself.  The great.  The not so great.  Everything in between.

The only thing I remember about the awards dinner was how much I didn't want to be there.  I wolfed down dinner, went up to the stage when my name was called, picked up the awards, and was back in my room, watching the World Series before you knew it.

There are two awards I do cherish, and look for those stories here, some day down the road.
AT 12:00 AM