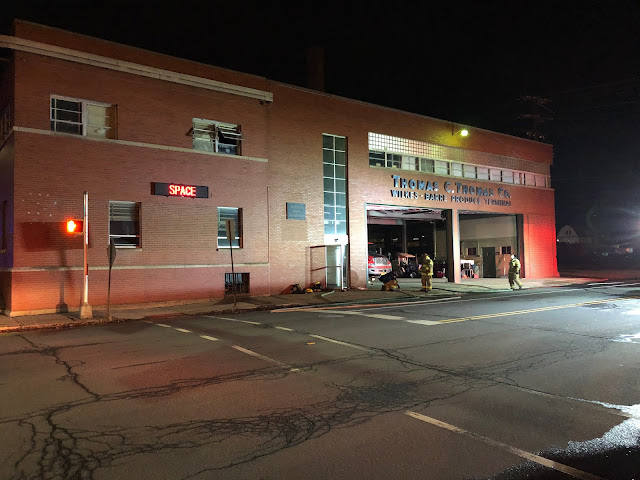 There was a small fire at the Thomas C. Thomas building on North Pennsylvania Avenue in Wilkes-Barre a couple of weeks ago.  This was a produce terminal for many years, and there are still tomato coolers in the building.

An employee of one of the agencies was showing us the smoke damage, and I did a little wandering about.  My travels took me to an area where DER used to hold its news conferences.  Memories of one horrible afternoon came flooding back.

Once upon a time, there was a company called Pennsylvania Gas & Water has unprotected water sources. Beavers under stress, we were told, were using the reservoirs as their toilets, and the company was pushing contaminated water through its vast system.  At a news conference one afternoon, DER announced big sections of the Scranton/Wilkes-Barre area, including my home, were under a boil water advisory.  Drinking the water could make you violently ill.

The news conference wrapped up.  Dilemma.  I was on the radio at the time, and WARM was never hesitant about breaking into programming for news bulletins.  We excelled at it, and this was an enormous story.

What to do?  Call the family, or call the station?  If memory serves, and I could be wrong, I think I called the station.  I don't think anybody was home, anyway.

PG&W eventually built state mandated water filtration plants, and the state even gave you the pleasure of paying for them.  PG&W eventually sold out and no longer exists.  A lot of people made some big money as you kept running to the bathroom because the water made you sick.