Andy's Angles: It Wasn't My Fault! 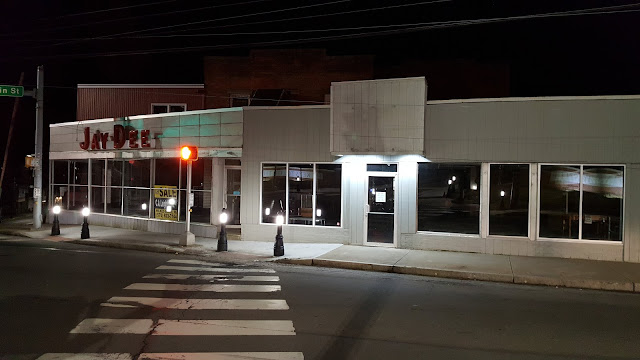 I was passing through Plains Township on a recent morning and I saw this.  It was sad, even though we all knew it was coming.  Jay Dee, the Sneaker King, closed its original store in the middle of Plains.  Other stores are still open and doing well.

I swear.  This closing wasn't my fault.

It's been a while since we've had an Uncle Apal's story time, so here goes.

Once upon a time, I was the "swing man" at WARM 590.  I did news when needed.  I ran the weekend overnight religion and public affairs programs.  I was even a disc jockey, mediocre, at best.  There was even the rare occasion when I had to record commercials.

I don't know why it fell to me, but I was the voice of Jay Dee, The Sneaker King during one season of Penn State football broadcasts in the early 80's.  I came to work on a Friday evening, and there was a page of commercial copy in my mail box.  I had to record it, cart it up, and make sure it ran in the next day's Penn State broadcast.

Commercials in satellite programs and sporting events have to be strictly timed.  Too short, and you will have dead air at the end of the break.  Too long, and you will trample on the play by play or the re-join into the program.  And, yes, I know, this is all inside baseball, and many of you are already likely bored with the story.

As hard as I tried, and I can talk fast, I could not get that commercial to hit 30 seconds.  I was always over.  Next step, eliminate words.  I tried to cut as little as possible.  After several tries, I hit 30 seconds on the nose.  Success.  Not really.  I read so fast and cut so much of the copy, I don't think we sold many sneakers that football season.  It wasn't a very good commercial.  Perhaps I am being too hard on myself.  No one complained, not even the Sneaker King.

So, the flagship store is gone.  I swear, my ineffective commercial nearly 40 years ago had nothing to do with it.
AT 12:00 AM