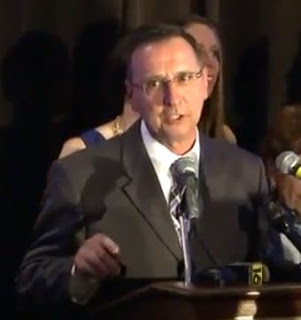 Scranton mayor Bill Courtright resigned, admitted to being corrupt, and is going to jail.

According to court papers, it appears Courtright was running a criminal enterprise from the day be became mayor in 2014, shaking people down for money, political donations, work on his home and business.

You think that with all the corrupt politicians in trouble with the law in recent years, Courtright would have traveled the straight and narrow path.  He didn't.  He pays the price.  We all do.

There is even less faith in government and the political system.  A small part of me thinks this puts a black eye on Scranton, with businesses less inclined to locate and grow here.  The big part of me knows businesses move in for cheap labor, cheap utilities and cheap land.  Corruption and thievery don't make much of a difference.  If businesses based decisions on corruption, northeastern Pennsylvania would be a desert.

My dealings with Bill Courtright were always professional, cordial.  I didn't think he was an inspirational leader, but he was there when he needed to be, most of the time, and the city didn't go bankrupt on his watch.  Our last encounter was on the morning of a springtime tornado.  He appeared to care, and I believe it was genuine.

This isn't the first case of high level corruption in our area.  Sadly, it won't be the last.
AT 12:00 AM