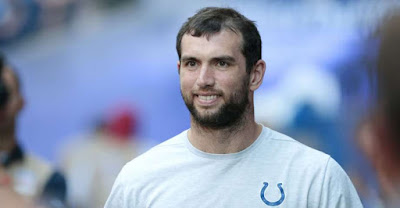 Andrew Luck of the Indianapolis Colts suddenly retired Saturday night, just two weeks before the start of the regular season.  The reason:  frequent injuries and he can no longer endure the pain.

Luck turns 30 September 12.  He's been in the league seven years.

SportsTalk radio is filled with detractors, saying Luck has horrible timing, leaving his team unprepared for the upcoming season.  Luck was booed by Indianapolis "fans" Saturday night and that was utterly horrible behavior.

I will never like the Colts because of the way the Irsay family left Baltimore in 1984, but I side with Mr. Luck.

I would be skeptical if Indianapolis was a bad team.  Many experts say the Colts are Super Bowl caliber.  Walking away from a bad team would be easy.  You have to have a good reason if you're bailing on a good one.  Luck suffered a lacerated kidney, a concussion, a torn abdominal muscle and shoulder injuries during his short time in the NFL.  Retiring makes sense.

The Colts are allowing Luck to keep millions in bonus money and that is a nice gesture.  It would be nicer if Andrew Luck gave it back, or donated it to charity.
AT 12:00 AM