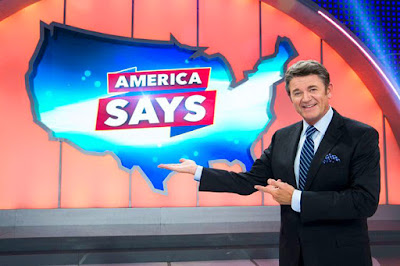 I yammered on about the new game show "25 Words or Less" a couple of weeks ago.  There is another new game show out in syndication this fall.

Apparently "America Says" did well enough on GSN to earn the right to be sold to individual broadcast stations around the country.

It's oddly addictive.  "America Says" is like "Family Feud," except the rounds are timed and the show is not dirtied up and dumbed down, as "Family Feud" has become.  It's very easy to play along at home, and you will find yourself screaming answers at the television.

John Michael Higgins, who played David Letterman in HBO's "The Late Shift" movie, several years ago is the host.  Normally, actors make lousy hosts because they're used to playing characters and not being themselves.  Higgins does a nice job.  He's funny when he has to be, and moves the game along nicely, without getting the way.

"America Says" has some flaws.  Like "25 Words or Less," the final round has enough points available to render the earlier rounds irrelevant.   Plus,  the bonus round, worth $15,000, is nearly impossible to win.

The show isn't great. but you won't be sorry if you spend a half hour watching "America Says."
AT 12:00 AM