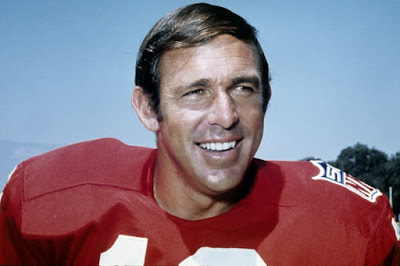 I was watching NBC coverage of a 1981 San Diego vs Miami game on the NFL Network the other morning.

Don Criqui was the play by play announcer.  I've always been a huge Criqui fan.  Great voice.  Exciting delivery.  He was just a fun listen.

John Brodie, on the other hand, brought noting to the table.  Zero.  Criqui tried to set him up to deliver interesting observations by asking pertinent questions.  Brodie wouldn't take the bait.  He just didn't deliver.

Brodie was one of those "star hires."  NBC picked him up after a great career as quarterback of the San Francisco 49ers.   Sometimes, it works out.  Sometimes, it doesn't.  The broadcasting highway is littered with the carcasses of those who had stellar sports careers, but couldn't get it done in front of a microphone.

I'm being unfair here by using 2019 standards as judgement.  We now expect our "color" broadcasters to be colorful, to deliver insight and opinion, to make headlines.

Tim McCarver was excellent on ABC, CBS, and FOX baseball broadcasts.  Former Dallas quarterback Tony Romo is the current media darling.  His contract is coming up for renewal, and it looks like someone will pay him a fortune.  ESPN still struggles bringing star talent to Monday Night Football.  Cris Collinsworth. love him or hate him, delivers for NBC every Sunday night.  Troy Aikman on FOX has been turning solid performances for years.

Other than that, there really isn't much "ear grabbing" talent out there.  I dislike the ones who are controversial just for the sake of being controversial.  Bob Raissman of the New York Daily News said this week that only two broadcasters had a positive impact on television ratings-- John Madden and Howard Cosell.  I agree.

Can't we find more people who have style and substance?
AT 12:00 AM