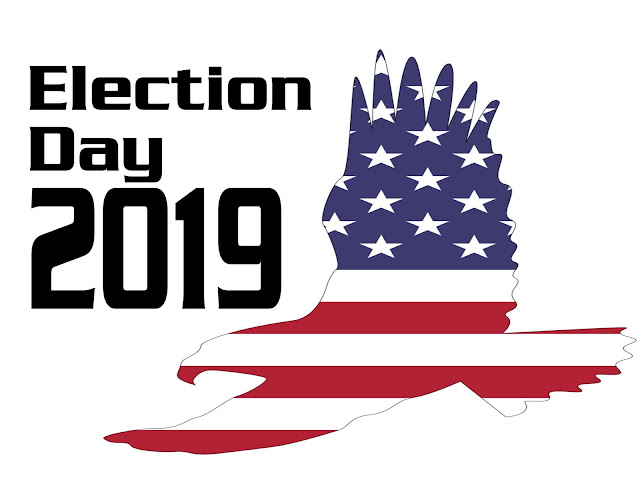 It's finally here.  It's Election Day in Pennsylvania

Use your right.  Use your privilege.  Use your television remote and  punch in WNEP all day, and WNEP2 for wall to wall coverage, beginning when the polls close at 8 PM.

My work plans are up in the air as I begin the day, but a short caucus with the producer, anchors, photographers, and fellow reports should quickly solve that.  We did a lot of the preliminary work yesterday, and there are a few different scenarios that can play out.

I'll be voting after I get out of work at noon.

I wouldn't be surprised to see a larger than normal turnout today, especially in Lackawanna County.  That's where there is a big race for county commissioner and Scranton mayor.

Some quick notes about the race for Scranton mayor...  The winner fills out the last two years of admitted felon Bob Courtright's term.  I know some of the candidates personally.  No matter who wins, the city will be in good hands.  After all, the bar hasn't been set very high.  The last elected mayor was running a criminal enterprise out of his office.

There are seven in the running.  A close race would not be a surprise.  I would not be shocked if we didn't know the winner at the end of the night.  With that many in the race, it's bound to be close, with write ins, recounts and absentee ballots telling the tale.  Stay tuned.

And, when you hear any so called expert say it all comes down to turnout, laugh and turn the dial.  Every election, every race, depends on turnout.

One of the candidates released a poll yesterday, showing that candidate is far in front.  There is a large number of undecideds as we begin this election day.  I have a feeling many voters will not make a choice until they have ballot in hand.

See you at the polls, and look for a little numbers analysis in this space tomorrow morning.

>>>2:30 AM UPDATE:  Already been at the office for a while, going over notes and scripts, recording the audio for my election morning stories.  In a break with tradition, I skipped my usual election morning breakfast of a fast food spicy chicken sandwich and fries.  I just wasn't feeling it.  My choice was unfrosted strawberry Pot Tarts and a granola bar.

>>>4:40 AM UPDATE:  We picked Hazleton City Hall for our live shot location this morning. There is a mayor's race here today, one of four big cities in our area picking  mayor today.  Hazleton City Hall is also a polling place.  I thought I over-dressed this morning, but in retrospect, it was a wise decision.  It's cold up here!

>>>7:20 AM UPDATE:  Two polling places at Hazleton City Hall.  Brisk early morning turnout, but not what I would consider heavy.  Only a couple of people waiting in line as the polls opened at 7.  Several more trickled in during the first few minutes.  Very nice people here.  Met several morning broadcast fans.

>>>8:15 AM UPDATE:   Anecdotal reports of mixed turnout.  Lighter in Luzerne County, heavier in Lackawanna County and Scranton.  There is typically a rush at the beginning and the end, slower in midday.

>>>9:40 AM UPDATE:  Finished writing a story for noon, handed script off to editor and photographer Bonnie, talking with our crews headed out the door for a very long day and night.

>>>11:00 AM UPDATE:   Signed, sealed, delivered.  Noon video piece is completed.  Heading out the door to be live at a polling place at noon.  I'll stop to vote on the way home.  If all goes well, there will be an afternoon nap so I can stay up tonight to watch the election returns.

>>>2:10 PM UPDATE:    The live broadcast at noon went well.  I saw some old friends and a few new ones at a polling place in Scranton.  After work and after the dry cleaner, but before the bank and pizza shop, I voted.  I was number 111 in my precinct.  To be honest with you, that is not really an impressive number.  It's easy to understand.  All the borough races were decided in the primary.  There are only two contested races on the county level.  I get the apathy, but it doesn't mean I have to like it.

As I was leaving the office, an army of people was entering.  They're working on our afternoon and evening broadcasts, plus election coverage.  Plenty of people are working double shifts to make sure you get the information you need.  I did come in a little early and spent plenty of time running around, but it wasn't even close to pulling a double.  I appreciate the hard work of my coworkers and I know you do too.

That's it for this day.  There will be an attempt at some analysis in this space tomorrow.  Be well.  As Barry Farber used to say, "I'll call you back later."
AT 12:00 AM