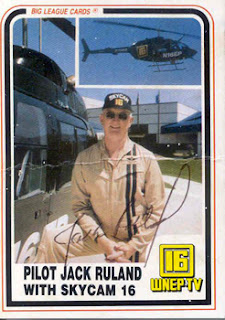 I never flew in Skycam 16 with pilot Jack Ruland.  I arrived at WNEP in June of 1998.  Most of my first year was spent producing and on the assignment desk.  I was moved to reporting as Jack retired, in 1999.

Our paths crossed a few times while I was working down the street, and of course, during the time we overlapped at WNEP.  He was always cordial, always professional, and as the guy who assigned crews to fly in the helicopter, I never heard one complaint.  People felt safe with Jack at the helicopter controls, and that is the highest compliment you can pay any pilot.  Trust.

Even though I was never in Jack's passenger seat, here's what meant the world to me.  Jack accepted me as part of the WNEP family.  He never looked down on my because I worked for the competition.  We often would chat about our mutual friends, in and out of the business.  In the early days, I will admit, there were just a few folks in the newsroom who were a little less than welcoming, an exceptionally small minority.  Thankfully, they have moved on to other endeavors.  Jack was a class act.  It was always a treat when he stopped by the office for post retirement visits.