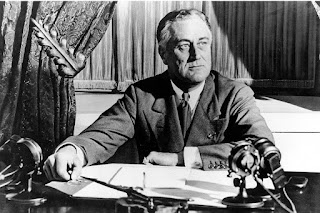 Sunday marked the 75th anniversary of the death of President Franklin Delano Roosevelt.

If you ever get the chance, and it's not that far away, visit the Roosevelt home and museum in Hyde Park, NY.  If you didn't appreciate the man's accomplishments, you will after a tour.

Roosevelt led a nation out of the depression and a world war with a failing body.  His old style wheel  chair must have been awfully uncomfortable.  The size and weight of his leg braces  is amazing.  I don't know how anyone would be able to move with those things.

It's a majestic setting along the Hudson River, and the house is set well back from the road.  Our tour guide told us how Roosevelt would often attempt to "walk" from the house to the road to rebuild his strength after polio.