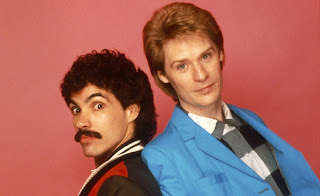 Hall & Oates is one of those acts I always take for granted.  They were everywhere in the early and mid 80's-- impossible to avoid.  That's not really a bad thing.  They were hugely successful and most of the music was pretty good.

I flipped the radio to a music station on the way to work Monday morning, and "Out of Touch" started pouring out of my speakers.  It had been a while since I heard it.  All the words came back, and I started thinking to myself how much I actually liked the song-- now that I rarely hear it.

A Wiki search shows "Out of Touch" was the top song in the country for two weeks in December of 1984.  It was their last number one single.

I blogged recently how hearing ELO's "Mr. Blue Sky" took me back to a better time and place.  "Out of Touch" doesn't conjure up the same feelings in my head and heart.  Still, it was a pleasant four minutes.
AT 12:00 AM