Carol Dennis died last week.  Her husband, Bob,  was a videographer at the old, old WDAU/WYOU for many years, and was a great guy.  Most days, Bob was partnered with the legendary David DeCosmo.  Both helped me find my way around the Luzerne County Courthouse and the surrounding area during my days as a young radio pup.

Indulge me as I tell a couple few stories.

I got wind that I was going to be the victim of an economic cutback at WYOU in 1996.  I was working with Bob on the day the axe was to fall.  As we rode in the truck to an assignment, I told Bob my demise was near.  I remember exactly where we were at the time, Interstate 81 south, near the Pittston/Dupont exit.  Bob assured me that I was a good and valued employee, very versatile, and skilled at many tasks.  Bob added nothing would happen to me, and if it did, he would help me carry my things to my car.   When I got fired later that day, Bob felt worse than I did.

I'm not sure exactly how it started, but Bob and I had nicknames for each other.  Tiger and Pumpkin.  He was Tiger.  If memory serves, the names came from a fight two other staffers had.  Bob and I had nothing to do with it, but somehow, the nickname thing stuck.

Bob died in the summer of 2007.  When I arrived at the funeral home for Bob's viewing, Carol looked at me and said, "Hello Pumpkin."  We both smiled and at a time like that, we really appreciated it because smiles were hard to come by.

And finally, the toughest lesson of all. 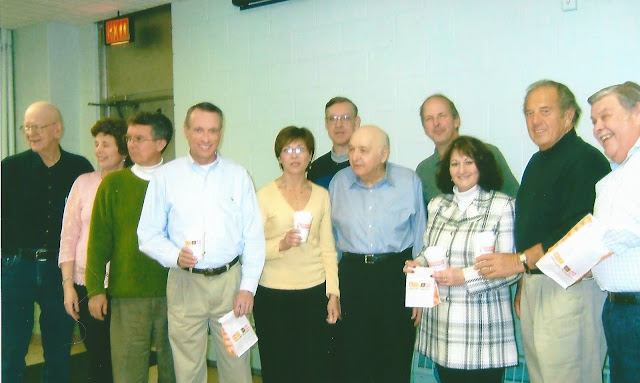 The photo you see above was taken at another videographer's 50th birthday party, several years ago.  A friend presented me with the prints.  I didn't go.  It was a Sunday afternoon.  I was coming off a long overnight shift and I was too tired to move.

It's a decision I will always regret because it would have been the last time I would have seen Bob, pictured here in the dark shirt on the far left.  He died from cancer shortly afterward.

On a Facebook page, several of my former coworkers are taking comfort in the fact Bob and Carol are together again.  I will echo that sentiment.  They were two special people, and I'm glad I knew them.

My sympathy to Carol's family and friends.