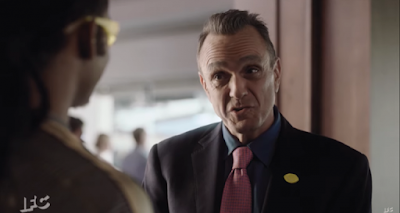 Long story short, "Brockmire" starred Hank Azaria.  He played a major league baseball announcer hit hard by his wife's infidelity.  There is drinking, drug use and assorted other debauchery.  Jim Brockmire begins his crawl to respectability by doing the baseball games of the Morristown, PA "Frackers" over the stadium's public address system and the internet.  The series is set in several places over the years-- Tampa, New Orleans, the Philippines, Kansas City, Oakland and New York,  The Morristown stuff and the fracking references gave me, by far, the most laughs.

The first year was hilarious and broke some new ground,  Seasons two and three deal with Jim's efforts at sobriety.  In the fourth, set ten years in to the future, Brockmire becomes baseball commissioner, tasked with saving a dying sport and battling the artificial intelligence of an Amazon Echo type device, intent on taking over the world.  On top of that, there are struggles with a now adult daughter and a Parkinson's diagnosis.

Joe Buck popped up in several episodes over the show's run-- and was absolutely hilarious, playing a parody of himself.  Buck's talent goes far beyond the broadcast booth.

While I can't say I'm a huge fan of the fourth year, it was great to see the return of Amanda Peet and Tyrel Jackson Williams.  They weren't around much in the middle years.  I would have loved to have seen more from the first season show up in the finale, but at least they were mentioned by name.

I won't give away the ending, but it appeared to be a happy one, although a small part of me feels Jim Brockmire wasn't being totally honest.

I thought "Brockmire" was great television, but it's not for everyone.  At times, the humor was amazingly clever.  At other times, it was rather coarse.  However, it all worked in my book.

Hank Azaria was always one of my favorites, and the position is firmly cemented after the short run of "Brockmire."  I had no idea who Amanda Peet was before all of this.  Big fan now.

It was sad to see "Brockmire" come to an end, but it was never meant to be a long running series.  Limited run.  Go in, do good work, and leave people happy.  It worked for me.