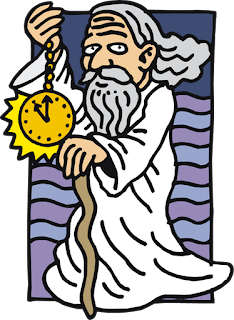 Last week's death of actor Sam Lloyd, who was part of the "Scrubs" cast, started me thinking and doing a little math.
Lloyd was only 56 when a brain tumor took his life.  "Scrubs" premiered in 2001, so Lloyd was in his late 30's for those early years.  To say the least, I was surprised at his age.  He always seemed older.  It's quite possible Sam Lloyd looked much younger in person and off the "Scrubs" set.  His television wardrobe left a lot to be desired.  The producers deliberately made the Ted character look sweaty and there was usually a bit of a 5 o'clock shadow.  Maybe they just wanted him to look a little older.  My friends, that's why they call it acting.
In the same vein, there is Abe Vigoda.  He played Detective Phil Fish on "Barney Miller."  Fish retired a few years in to the show's run.  Vigoda was born in 1921.  "Barney Miller" premiered in 1975.  Vigoda was only 54 in that first season.  According to series star Hal Linden, Vigoda was always one of those people who looked older than he actually was.  Plus, he simply did a convincing job of playing a detective approaching retirement.
Me?  I started going grey in my late 20's and that was a long time ago.  Even though I see the grey hair every day, it's still a bit of a shock when my barber takes that first swipe with the electric trimmer and a pile of grey hair falls into my lap.  Plus, the grey is even more vivid because the capes at my barber shop are black.  Contrast.
Honestly, the grey doesn't bother me and I never attempted to cover it up.  I once worked for an organization that arranged for "hair services" at a hoidy, toidy salon.  I was never truly comfortable there, even though the staff was great.  The woman assigned to make some sense of what I had always wanted to do a "color rinse."  There was a brief moment of curiosity, but I never was tempted enough to pull the trigger.
I once worked for a man who hated my eyebrows.  They weren't dark enough.  Seriously.  I had to duck out to the drug store outside the station's back door one morning and buy an eyebrow pencil.  I retired the pencil when I changed jobs.  I should add that the eyebrow guy and I got along great, one of my favorite bosses ever.
We just disagreed on my eyebrows.
AT 12:00 AM