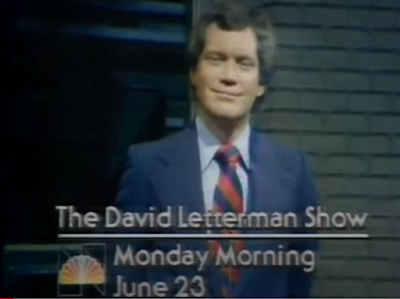 "Hollywood Squares" was kind of tired.  It was time to go.  Production moved to Las Vegas and the show went in to syndication for a year or two.  It wasn't the same show without Paul Lynde.

"High Rollers" wasn't a bad game, but it moved too slowly.  The game play was too clunky.  This one is ripe for a reboot.

"Chain Reaction" was only mildly amusing and it never had a bonus game that worked.

Letterman's morning show was brilliant.  Unfortunately, it was too hip for the morning audience and it never caught on.  I was in college for its run, and I knew fellow students who arranged their class schedule around the show.  Bad move.  It was cut to 60 minutes in August and eventually canceled in October.

I give NBC president Fred Silverman credit for trying something different in the morning.  The ratings were awful.  Some NBC affiliates were threatening to drop the show and put syndicated product in its place.  Silverman was quoted as saying "I was losing the network."

The other was "Blockbusters."  Bill Cullen hosted-- the same guy who lost "Chain Reaction" five months earlier.  I always thought "Blockbusters" was an underrated game.  Simple to understand and easy to play along at home.  It ran for a year and a half.  A Bill Rafferty hosted revival lasted for five months in 1987.  It was a strong game, but it doesn't have enough flash and pizzazz for today's market.

What amazes me most is-- this stuff was 40 years ago and I remember it like it was yesterday.
AT 12:00 AM