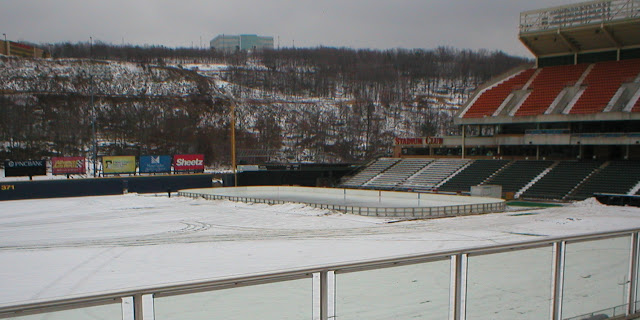 I was going through a box of old stuff the other day when I stumbled across my very first digital camera.  It was an Olympus D-380, a whopping two megapixel, and I recall it cost me a decent amount at Target.

Curiosity got the better of me.  I cleaned out some internal corrosion and popped in some fresh batteries.  It fired up nicely.  It takes a memory card the size of a floppy disc, so there was no way I could play the card in any contemporary device.  The camera came with its own software, on a CD.  I took my chances and plugged it in to my PC, to see if it would download.  It did!

Olympus still has a copy of the manual on its web site, but a lot of the operation came back to me.  This is a fun and easy to use camera.

The above photo was taken just before Christmas in 2005.  It's the old Lackawanna County Stadium, with a temporary skating rink in right field.  The county did this for a couple of years, and it was rather popular.  New ownership.  New commissioners.  New stadium.  Real grass rather than artificial turf, and the rink is a distant memory.  Still, it was a nice thing to do, and it was a decent break from our area's long, cold and boring winters.

The card didn't contain many photographs.  There are a few others of interest, and look for those on the Fridays to come.
AT 12:00 AM