...EVERYBODY KNOWS THE RULES. 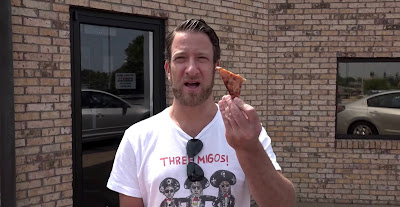 I have to admit, he grew on me.

There was a stop in Old Forge last summer, and Portnoy generally gave the restaurants there decent reviews.

My first impression:  this guy is a jackass.

But then, I watched more of his reviews.  Yes, he's still a jackass, but there is a disarming charm.  Plus, I like pizza.

Portnoy made another swing through our area last month.  More pizzas.  More reviews.  Again, he liked most of what he sampled here.  Frankly, I'm surprised because he liked some pizzas I think are awful.  American cheese has no business being on a pizza!  It has the consistency of wax, and the flavor of cardboard.