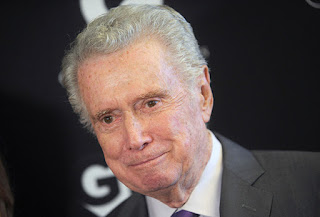 He is one of the very few entertainers who conjures up instant recognition from a first name only.

Let's get some things straight.  Regis wasn't my thing.  I wasn't in his target demographic.  I always found a little bit of the guy went a long way.  Yes, I was in the minority on this one.

However, I do respect his popularity, and his long run in a cruel and heartless business.

I do owe Reege a bit of gratitude.  Regis always said he and Drew Carey saved ABC.  The network had only two shows pulling ratings in 1999:  "Who Wants to be a Millionaire!?" and "Drew Carey."  As an employee of an ABC affiliate, thank you.

I always saw Regis Philbin as an unusual character in this business, someone who can be endearing and annoying at the same time.  That's rare.

His morning talk show act didn't work for me.  Please note earlier line that I wasn't in his target demographic.  It was a nice, little, breezy oasis away from trash talk and court shows.

I did think he did an outstandng job on Millionaire.  He moved the game along, without getting in the way.  Whimsy mixed with gravitas.

His Letterman appearances were classics.  He wasn't afraid to poke fun at himself.

You can look at Regis Philbin as an inspiration.  There were some early career setbacks, but he always got up off the mat and kept fighting.
AT 12:00 AM