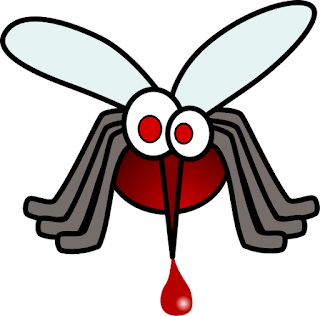 I was putting my bike away after a long ride the other morning when I felt a sharp pain, on the underside of my forearm, near my elbow.  I looked down to see a mosquito the size of a Buick, feasting on my arm.

I've been lucky this year.  Very few bug bites.  I guess tha't because I don't spend a lot of time outside.  This was an exception.  Not only was it a bite, it was a big one.

Greed does you in every time.  The mosquito wasn't happy for a quick sip of my blood.  He drilled in and kept going.  It gave me enough time to slap my arm and crush the mosquito like a bug.  Not to ne overly graphic, but it was one of those kills that leaves a little blood spot, from the greedy mosquito, on the bite mark.

I won the victory but lost the war.  The enemy was dead.  Unfortunately, I was left with a growing itchy and painful bump.  It's not my first battle wound.  I had some lotion that took care of it.  It was still slightly itchy a couple of days later, but I was fine, as long as I resisted the temptation to scratch.

It seems to be an exceptionally buggy summer.  Gnats are everywhere, although the swarm seems to have subsided.  An assortment of flying critters have taken a liking to the light on my back porch.  It's brutal.