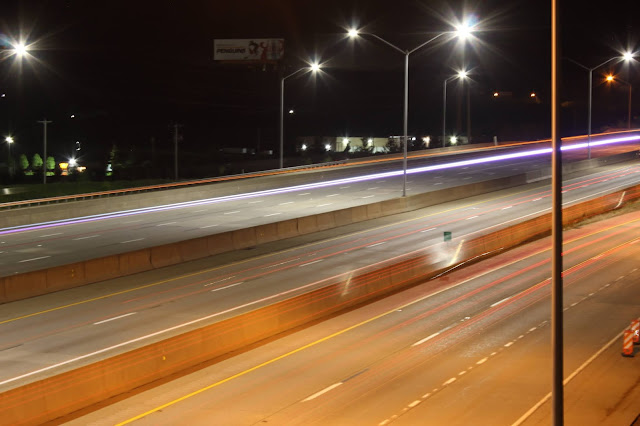 I've featured a lot of this type of photo here in the past several months, but this is the first time it's appeared as a header.

I've long had a fascination with slow shutter speed photography.  Several months ago, I gave it a try.  Let's just say there has been limited success.  The basics are easy.  The rest, well, not so easy.

This is a shot of Interstate 81 in Dunmore, from the Reeves Street overpass.  The challenge here was to capture the streaks of car and truck headlights and tail lights, while not getting blasted by the overhead lights.

You can tell from the starburst pattern of the overheads, I had this one f-stopped down fairly severely.

It's far from a perfect shot.  It's awkward framing because I had to shoot around a protective fence.

By the way, I changed the "name" font this month.  It's the same style used by one of my favorite television shows of all time, "NewsRadio."
AT 12:00 AM