In the Tick of Time 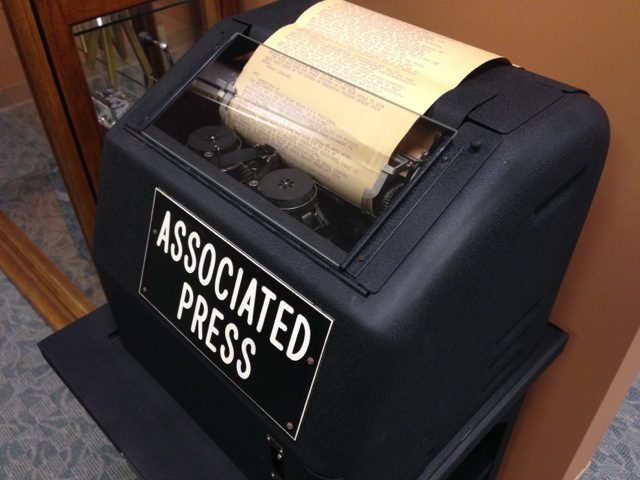 To be brutally honest with you, I didn't notice.

KYW 1060, the all news station in Philadelphia, stopped using the teletype sound effect behind its broadcasts.

On the other hand, it was time.  The "sound" came from a machine, like the one pictured above.  The wire services started phasing out machines like that in the late 70's, maybe even a little sooner.

We had a teletype, very similar to this one, when I arrived at Marywood's radio station, WVMW in 1979.  Let me tell you something.  For a radio junkie and a news junkie, it was sheer magic-- a non stop parade of the latest news and sports from around the planet.  You could stand there for hours and read the dispatches.  Now, you pick and choose what you read, and further select what you want to print.  In the old days, these machines spit out EVERYTHING!

Little bells went off when something big happened.  It was three dings for an "urgent."  A "bulletin" warranted five.  A "flash" was ten bells.  I was never around for one of those, and I'm not complaining.  For the most part, they were bad things.

You always have to remember the time.  CNN was just a plan.  We did have an all news station based in Wilkes-Barre, but it was on the way out.  Al Gore had yet to invent the internet.  You had to wait for one newspaper to show up at your door in the morning, and another one in the afternoon.  Archaic.

There were issues.  The teletypes ate up big boxes of paper, and they chewed up ribbons.  Plus, those ribbons were a bear to change.  You can always tell when someone at WVMW changed the ribbon because their hands would be covered in ink.

We had a newer, and less noisy, model, when I arrived at WARM 590 in 1981.  The ribbon was still a challenge, but we had a pair of rubber dishwashing gloves in the newsroom for people attempting the task.

I envy the new people in the business because the technology is amazing.  But, I do feel sorry for them.  They never had the opportunity to experience the magic of a real teletype.
AT 12:00 AM