Doctor, Doctor, Give Me the News 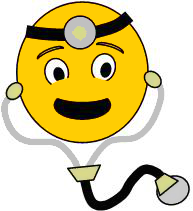 It seemed simple enough.  Call.  Arrange for a flu shot.  Get a flu shot.  Well, nothing is simple in the world of big medicine.

It is the system that fails, and bigger is not necessarily better.  And, one day I will write a book about my experiences with the Veterans Administration.  That is another story for another time.  Today's tale is not VA related.

Let's go back to the beginning.  I always get a flu shot in early September.  I made the call for an appointment.  After being on hold for 15 minutes, I had to jump through a series of hoops because my insurance has changed since my last flu shot.  Yes, I am thankful I have insurance.  Very thankful.

Here is where it gets sad and hilarious at the same time.  My primary care physician, who I haven't seen in years because he closed his quaint private practice and affiliated with a big medical group, left and I didn't know it.  No notice.  No recommendation for a new primary care physician.  No "arrivederci."  All the woman on the phone said was "he left us."  I didn't know if he quit, retired, or died.  I later learned he retired.  The woman on the phone was having difficulty scheduling me because I didn't have a primary care physician.  Finally, out of exasperation, I said, "Just put down Dr. Fauci."  The reply?  "Is he a (medical group) doctor?"  No, I explained.  He's the national coronavirus expert you see on TV every night.

I finally was scheduled, and arrived the next morning, at a huge medical building, for the shot.  The place was crowded.  Due to the current situation, that really gave me the creeps, even though there was a temperature check at the door.  On the other hand, they did seem efficient in moving people in and out, and I received my shot at the appointed time.

You may be asking why I just didn't go to the drug store.  Any time I have been to a pharmacy, it's been packed, and the pharmacists and techs are working as fast as they can.  I'd feel awful at taking them away from pill duty to give me a shot.  I can just picture some guy in line to pick up medicine for a sick kid, having to wait while I get a shot.  I don't want that.

However, after this year's experience, I might find myself in a drug store next year.