There Goes My "Nightly" Job

It's not every day that a network decides to do part of its morning and evening broadcasts from our area, so I just had to go and take a look at the set up. 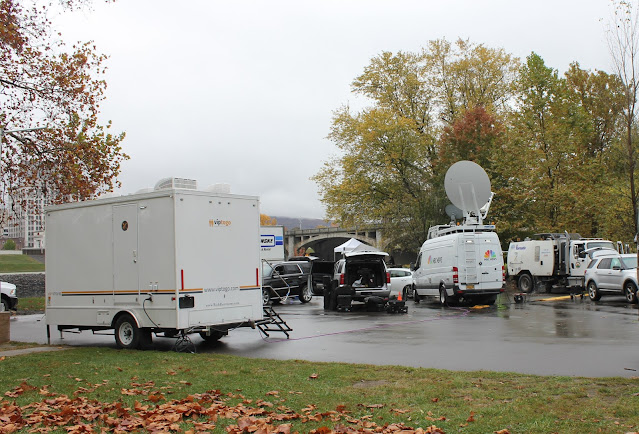 This is part of the network compound, along the west side of the Susquehanna River, looking back at downtown Wilkes-Barre.  Impressive.  Satellite truck.  RV work space, with for room for the "talent."  Portable generators.  Portable heated toilets.  Nice.  Top shelf stuff.  First class. 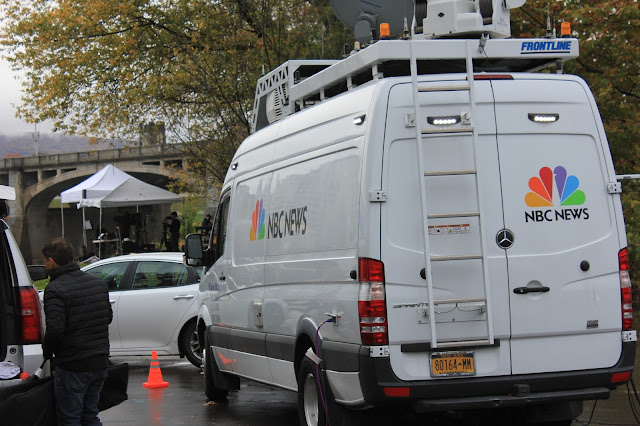 I've said here before that I've been trying to "up" my photography game.  Part of that is some new gear and learning a few new techniques.  Another element is branching out, away from my usual trains, buildings, bridges and rivers.  I'm looking to do more "people" and "event" things.  Case in point, Sunday morning's light bulb changing party at Scranton's Nay Aug Park that I posted on Facebook.  This was another step in the process. 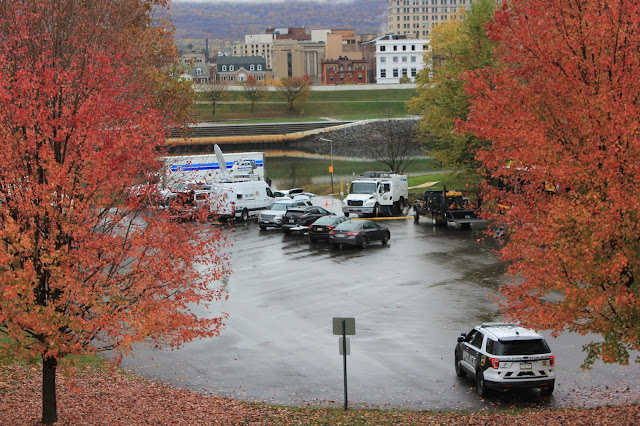 My first stop at the park was the police SUV, at the bottom of the photo above, for a talk with the officers keeping an eye on the place.  I told them who I was, and added that I wasn't there to pester Lester.  I just wanted to take some pictures as part of my hobby.  Even though I had two weeks worth of vacation beard, the officers recognized me.  The ID tag on my camera bag was also a give-a-way.  I added that I was going to keep my distance and it was all cool. 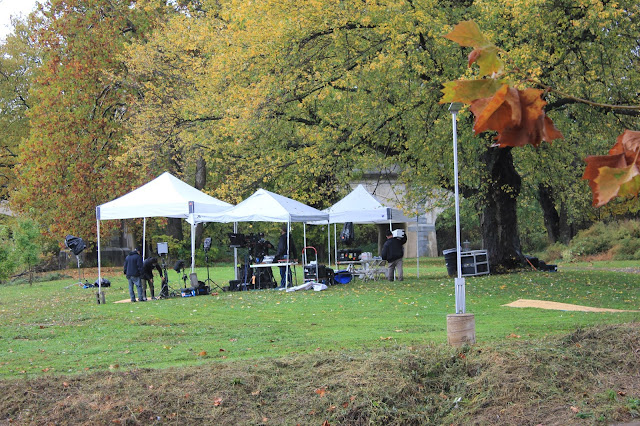 I took some pictures of the "anchor location" under those tents and started making my way back toward my car.  I will add that I parked a considerable distance away as to avoid being a nuisance.  It was a moot point.  Vehicular access to that park of the park was forbidden.
As I was walking away, but still in the general vicinity of the paved parking area, someone from the network sent their city liason to talk with the police.  The message:  there would be no photography of the network compound.  Really?  First off all, America already saw Wilkes-Barre because the same location was used for the network morning show.  It wasn't going to be a surprise.  Second, the officers reminded the network liason that it was a PUBLIC PARK and no laws were being broken.  I, or any other photographer, could have captured the same shots from the other side of the river.  A drone could have captured even more.
I told the officers that I wasn't there to make trouble.  I already had more photos than I needed, and was leaving anyway.
I do understand where the network is coming from.  You can't be too careful, concerning security, these days.  However, I took care of that from the get-go by introducing myself to the police officers and staying a fair distance away from the working staff.  If I looked like trouble and if I was disruptive, police would have sent me packing.  Was I revealing network secrets?  Does David Muir want to know Lester Holt travels with heated toilets?  Does Wolf Blitzer want to know the size of his RV?  Is Norah O'Donnell interested in that three tent set up?  Did others take pictures?  Yes.  At least one, taken by a member of the crew, was posted on Facbook hours prior to my arrival.
I don't know why I was singled out.  I do travel with professional looking gear.  Perhaps the network feared photos of the compound were going up on a big news site rather than my silly little blog.
Would another network organization have acted the same way?  Probably. Is attempting to bounce me a big deal?  Definitely not.
Lester.Holt, no hard feelings but it looks like some network people can use a little brushing up on the law.