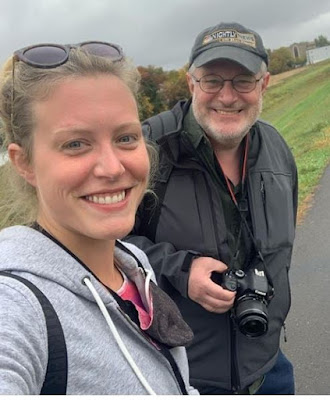 This is actually a picture taken by the woman on the left, WNEP's Chelsea Strub.  It's from late October  I ran in to Chelsea at Nesbitt Park in Wilkes-Barre.  She was going for a jog.  I was there, camera in hand, checking out the network that was broadcasting live from the area.  By the way, as you can tell by the beard, I was on vacation.
The network didn't want any photos of its operation.  Kudos to the Wilkes-Barre Police officers, who reminded the network people, guardians of the First Amendment, that it's a PUBLIC park.

This was a big year for Chelsea, as she entered the rotation of fill in anchors, and she's doing a great job.