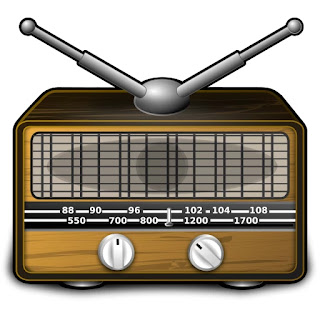 It happened 40 years ago.  Interviewed at WARM 590 on the last day of March, hired on the first day of April, worked my first shift April 5th.

I've told you about that first job before.  Indulge me, on this 40th anniversary.  A college friend already working at WARM told me there was an opening for a Sunday morning person.  The shift was unofficially called the "God Squad."  I would start at 1 am, and play two hours of pre recorded music.  The next six hours would be a mix of religion shows and public affairs programming.  I jumped at the opportunity.  It was a foot in the door and a couple of dollars in my pocket.  As a college sophomore, I appreciated every nickel.  Plus, it was WARM-- the station I grew up with.  I was almost weak in the knees as I walked through the doors of the studio in Avoca for that interview.

There was another applicant.  The program director couldn't decide which one was best, so he hired us both and the plan was to alternate Sunday mornings.  As it turned out, he quit after about a month, so it was all mine!  That person continues to have a very successful career in academia.

One overnight a week eventually became two.  I kept that schedule for about a year.  College during the day, the college radio station a night or two a week, and WARM on weekends.  I gave up the weekend overnights when I moved to playing a little music on Saturday nights and handling a news shift once in a while.  There was an eventual transition in to full time news.

Minimum wage when I started was $ 3.35 an hour.  The WARM job paid $ 4.00 and I was in heaven.  It was gasoline money and hoagie money.  As I added more hours, it took care of clothes, college text books, and the occasional pizza.  Yes, things were much cheaper 40 years ago.

I told an upper classman about landing my first job, and he said the words that ring in my head to this day:  "You are now a paid professional."  Yes, I was paid.  Professional was a bit of a stretch.

My philosophy then is as it is now-- take whatever you're given, do it the best you can, and eventually, things take care of themselves.  I timed the shows and the filler music so they hit exactly on the hour and half hour.  The cabinet where we kept the reels of tape and lp's was always organized.  My logs were perfect.  I never forgot to do my transmitter readings.  Aside:  there were no computers, hard drives and downloads in 1981.  The shows were mailed in, on reels of tape or 33 1/3 lp's.  It was the stone age.

I stayed at WARM for 10.5 years.  There were bumps in the road.  Looking back, what seemed major at the time is all so trivial now.  It was great experience and I was thrilled to get it.  I can still hear the voices of Harry West, Ron Allen, Terry McNulty, Jerry Heller, Ray Magwyre, Kitch Loftus, Guy Randall, Tim Karlson, Steve St. John , Jim Gannon, John Hancock, Chris O'Brien, and Paul Minda in my head.  I learned from what they told me.  I learned even more from listening to how they did things on the air.

We had some notable part timers during my era-- Jim Emmel and Frank LaBar, to name a couple.  It was a kick to work with them.

There is one name I haven't mentioned.  Vince Sweeney.  Vince came on at 9 on Sunday mornings for a while, as my shift was ending.  I used to hang around to watch Vince do his show and shoot the bull.  He was the first person at WARM I got to know, and I'm thrilled to say we are still in touch a couple of times a week 40 years later.

I am luckier than I deserve to be.