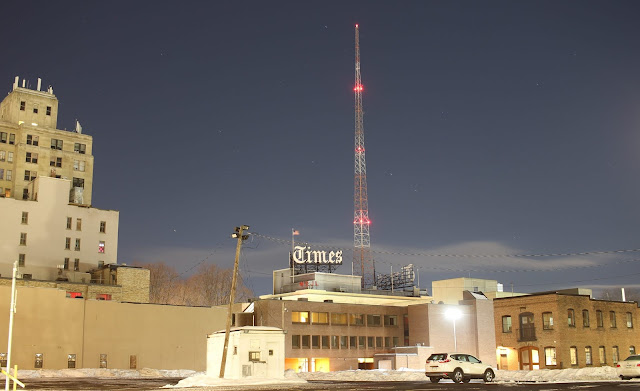 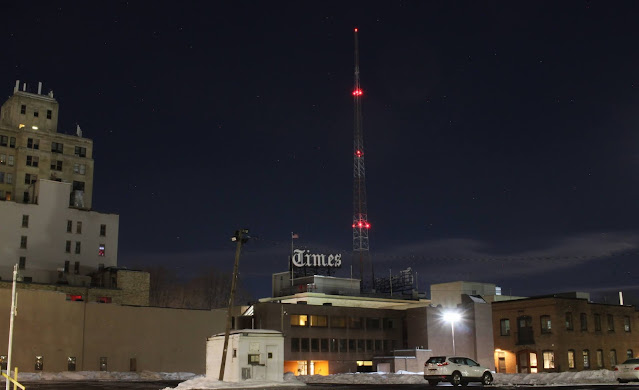 This month's blog header is total serendipity.  I was in the neighborhood shooting what I intended to be the blog header when I snapped off a few extra, just for laughs.  It turns out, I liked this one much better.
This is the Scranton Times building and the WEJL tower at Penn and Spruce, shot from a block away, at Wyoming and Linden.
The top photo is an example of turning night in to day.  I took at at 3:45 AM on a recent morning, a prime, wide angle lens let in a lot of light.  Plus, a prime lens offers a sharper image.  f stop was 4, and the shutter was open for 30 seconds.  It looks more like dawn or dusk rather than the dead of night.
It is a flawed photo.  There are two problems.  It was a windy morning and the flag atop the Times building is blurred.  Also, the stars are blurred.  It's part of the hazards of a long exposure.  Earth and the stars are moving a lot faster than we believe.  I digitally removed most of the stars and the SUV in the parking lot.
The bottom photo was taken a couple of minutes after the first, but there is a big difference.  It's another 30 second exposure, but I have the f stop choked down to 22.  It's why there is a starburst effect on the light above the white SUV at the bottom, but not at the top.
It's amazing at what you can discover when you take the camera off "automatic."
AT 12:00 AM