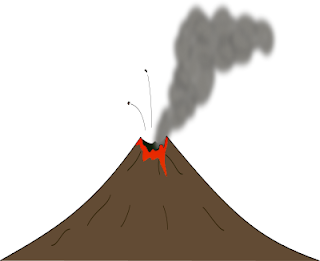 I ran a story about a volcano in Iceland on Newswatch 16 Sunday Morning.  Great video of lava spewing from the top and then flowing down hill.

I can't look at, or think about, a volcano without going back to a night in May of 1980.  I was on the air at Marywood's radio station when Mount Saint Helens in Washington blew.

WVMW FM was a rock station at night, and your job was pretty much to play the hits and shut up.  I couldn't resist.  We had one of those old style teletypes in the newsroom.  Bells went off when something big happened.  Three dings for what was billed as an "urgent."  A "bulletin" triggered five bells and those pings were going off all night.

I did eruption updates between songs, probably angering people who tuned in for their rock.  I tried to keep them short and move on.  After all, a college radio station is a teaching tool, and I did learn a lot about breaking news that night.

There is a special magic to being in a newsroom when something big happens, even if the newsroom is in the basement of a library and it's the size of a closet.  It's a chance to have a front seat to history from thousands of miles away.