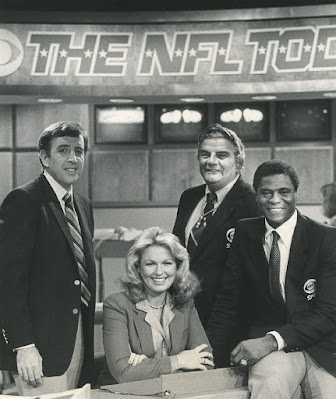 He was a pioneer.  Irv Cross was the first African American to hold a substantial role on an NFL broadcast.  In this case, it was the CBS pre game show.  The former Philadelphia Eagle died Sunday at the age of 81.

If you are too young to have seen "The NFL Today," I'm sorry.  The production and the on-air chemistry were perfect.  Yes, there were some squabbles off-air.  Phyllis George handled the interviews and profiles.  Jimmy the Greek had the insider information and predictions.  Jack Whitaker did some thought provoking and well written essays.  Cross was the serious nuts and bolts football guy.  Brent Musberger was the anchor who held it all together.  The show was half as long as what you get today, and twice as good.  I'm being conservative when I say "twice as good."  The broadcast was serious when it had to be, lighthearted when appropriate, and solid all the time.  To this day, it remains the gold standard for football pre game shows.

NBC played catch up, with several different casts over the years.  It never came close.

Irv Cross was a big part of the CBS success, and I hope his contributions will be remembered.