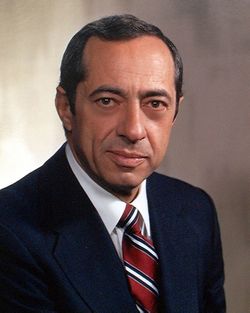 The Cuomo name has been in the news a lot lately, and it never fails to remind me of a brief encounter with then New York Governor Mario Cuomo.

It was 1992, and I was working down the street.  The new Binghamton Mets stadium was opening, and the station sent me to opening night.  A station from Rochester was sending a reporter to cover the opening as well because Rochester wanted a new minor league baseball stadium, and the reporter was supposed to ask Gov. Cuomo if the state could help.  Because we were affiliated with the same network, our satellite truck operator, our photographer, and I were supposed to help.

The governor arrived and was working his way through the crowd.  The Rochester reporter, a great guy, apparently didn't have much experience in being pushy with politicians.  He allowed himself to be boxed out by the crowd and couldn't get close to the governor.  he was trying to be polite and it wasn't working.  I grabbed his microphone, lunged toward Gov. Cuomo, got the microphone close, stuck it in his face, and asked how Rochester could get a new stadium.  I remember the response because it began with Cuomo saying Rochester should do what the people of the southern tier did--  come up with a feasible plan and present it to the state.  What stuck out was the way Cuomo said "tier."  In that New York accident, it came out "teeah."  There was no "R."

Governor Cuomo entered the stadium.  I handed the microphone back to the kid from Rochester.  He had his sound bite, and I had my brush with one of the biggest politicians on the national stage at the time.

The rest of my day was awful.  I've written about this part before, and I apologize if it's too "inside baseball."  The photographer, the satellite truck operator and I fed back two reports on the stadium's grand opening, one for the 5:30 pm broadcast and the other for the 6.  This was in the video tape days.  A curious intern back at the station decided to take a look, and she didn't put the tapes back in the proper "start" position.  When I tossed to the taped pieces, live from Binghamton, they weren't there.  Normally, I can ad lib my way out of a jam.  I guess I was startled by the screw up, and the live shot was a disaster.

The intern apologized when I returned to the station in Scranton that night.  I used it as a teaching moment and reminded her not to touch things that don't involve her.  At least, she fessed up to the mistake and that meant a lot.  It couldn't fix me looking like a fool in Binghamton, but tomorrow is another day.