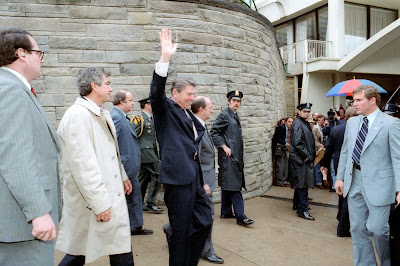 Don't ask me how this one slipped off my radar, but Tuesday was the 40th anniversary of the assassination attempt on President Reagan.

I remember it well.  I was a 19 year old sophomore at Marywood College.  I walked in to the radio and television area for a television performance class.  Some classmates were gathered around the teletype in the radio newsroom.  Others were looking at a television in the TV control room.  That's where I learned the president had been shot.  I spent the next several minutes running from the teletype to the TV and back again.  I literally had to be dragged in to the class in the TV studio.

I sped home after the class and parked myself in front of the living room television, and that's where I stayed for the next several hours.  I neglected the next morning's college assignments, but I faked my way through it when I arrived at school the next morning.

It's been established here that I was a big fan of ABC News anchor Frank Reynolds.  It was during the early hours of coverage when Reynolds flipped out when he learned the first reports of Reagan being okay were inaccurate.  There was a second episode when the network reported press secretary Jim Brady was dead, and then alive.  I can't say it was Reynolds' greatest performance, but I do understand it.  First, he was upset at the wrong information going out to millions.  Second, a friend had been shot.

Not many people knew it, but Reagan and Reynolds were close.  They got to know each other during Reagan's run for the White House in 1976.  Reynolds and Reagan were at opposite ends of the political spectrum, but they did bond during all those hours on planes, cris crossing the country.

In spite of the glitches, on all networks, TV really did shine that afternoon, and so did radio.  A Mutual Broadcasting System reporter, Ross Simpson, was far out in front of everyone else-- print, radio and TV.  I spent a good amount of time watching video from that afternoon and evening.  I'm amazed at how much the networks did, so fast, with archaic technology, when compared with today's gear.

And we can't forget about the doctors that saved the president's life.