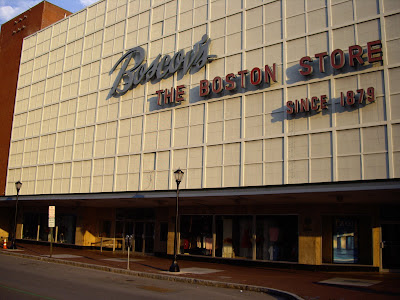 It's sad news. Published reports say the Boscov's department store chain is having some financial difficulties. Some manufacturers have stopped shipping to Boscov's stores because they're not getting paid.

The newspapers say Boscov's is trying to avoid filing for bankruptcy under Chapter 11. Remember that Chapter 11 does not signal a "going out of business" sale. It gives the company a chance to re-organize and get its financial house in order.

Boscov's management claims it's been hit hard by an economic downtown.  I suspect the chain got too big, too fast. Boscov's took over several mall locations left vacant when Macy's and Kaufmann's merged. It was a lot to swallow at once. I wouldn't be surprised if there are second thoughts at company headquarters. Opening all those new stores seemed like a good idea at the time. Unfortunately, no one saw the coming of some severe economic problems.

The newspapers also report the Boscov's chain might close ten underperforming stores. The downtown Wilkes-Barre store has been a notorious money loser. So far, no list of closing candidates from the company.
Other published reports quote Boscov's management as saying they will survive this downtown, and the chain will not file for bankruptcy protection.

My most recent trip to Boscov's was Monday morning, as I wandered about the Steamtown Mall in Scranton. Not many shoppers in Boscov's and the rest of the mall, but that's normal on an early weekday morning. The Boscov's shelves and racks looked normal-- no shortage of merchandise.

I stopped in a Public Square newsstand to buy some out-of-town papers yesterday morning. The Boscov troubles was the major topic of conversation. The man behind the counter speculated the Wilkes-Barre store was safe because, he claims, it's the place where the chain dumps all the merchandise that doesn't sell at other stores. Who knows?

Is it time to give up the ghost? So-called community leaders and elected types try to preserve and bring in new downtown retail. Why? America has changed. It's a waste of time to try to re-create downtowns of the 1950's. These days, downtowns consist of government buildings, private offices, medical facilities, and some small businesses, like restaurants, that cater to them. There might be a small entertainment strip. Like or not, big retail has fled to the suburbs, and it's not coming back. Modern shoppers don't want to go downtown.

Will clusters of smaller specialty stores work better than a big department store downtown? Maybe. What happens to the Boscov's building?

While I'm on the subject of downtowns, I took a long stroll around downtown Wilkes-Barre yesterday morning. There was a lot of activity around King's College. I asked a young man what was going on. He replied it was some sort of testing program. Several people were scrambling to come up with the change to feed the parking meters. I came to the rescue of a young woman who needed change for a dollar.

My point is this-- why didn't King's make parking arrangements somewhere, and why is the city busting chops at parking meters on a Saturday morning? I know it takes a lot of money to run a city, but I think Wilkes-Barre can do without the handful of quarters that come in on Saturdays. Want to make downtown more attractive to shoppers and businesses? Make it easy for people to people to park.
AT 12:01 AM