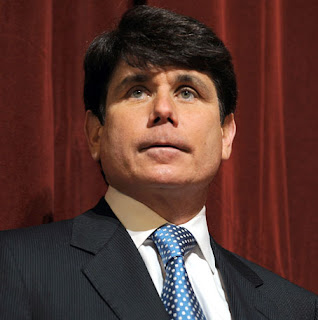 What is it with you people in Illinois? Why do you keep electing bums to serve as governor? Since the early 70's, three former governors have done jail time, and it looks like you're about to get a fourth.

Governor Rod Blagojevich was arrested Tuesday, charged with, among other things, trying to sell the seat in the U.S. Senate, about to be vacated by Barack Obama.

The evidence against Blagojevich is stunning. As an analyst on WGN put it Tuesday afternoon, you don't need an attorney to figure this out. You need a psychologist.

I was glued to the television Tuesday, watching the news conference, listening to the experts. It was fascinating, and sickening at the same time.

The folks in Illinois would probably be in awe of the shenanigans allegedly taking place around here. Northeastern Pennsylvania can give Illinois a run for its money when it comes to corruption. Some of the dirty deeds are legendary, and it seems like we have more politicians under investigation than we have clean ones. If even half the rumors are true, you'll see some interesting people in handcuffs in the months to come.

It doesn't make me happy. Yes, it's nice to see scoundrels brought to justice. Unfortunately, they shouldn't have been in positions of power in the first place. You get what you pay for.
AT 12:01 AM