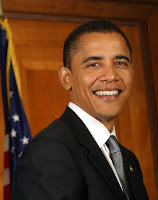 As my co-workers will attest, I can be a stickler on some things, to the point of annoying excess on occasion.

Apparently, no one told Mr. Obama and many media members about the intricacies of the law. Reporters started calling Obama "president elect" the night of November 4th. Obama has been conducting news conferences from behind a podium that read "Office of the President Elect" since shortly after the election. Wrong. It drove me insane.

The Electoral College vote yesterday was a mere formality. Yet, it was important. The law is the law.

TV stations have a gizmo called a "character generator." Most of us refer to it by its brand name, "Chyron." It's the thing that puts the letters and titles at the bottom of your screen. Throughout the election, we put "Sen. Barack Obama, (D) Illinois" on the screen during "sound bites" and interviews. We argued what to do after the election. I wanted to continue what we had been doing, while others suggested "president elect." At least on the weekend morning broadcasts, we decided on nothing. Nothing is an honor reserved for the president, the vice president, the pope, and the governor. In a way, we elevated Obama to presidential status, even though he was weeks away from placing his hand on the bible.

It's over. We won't have to re-visit the issue for another four or eight years. My co-workers are thrilled.
AT 12:01 AM