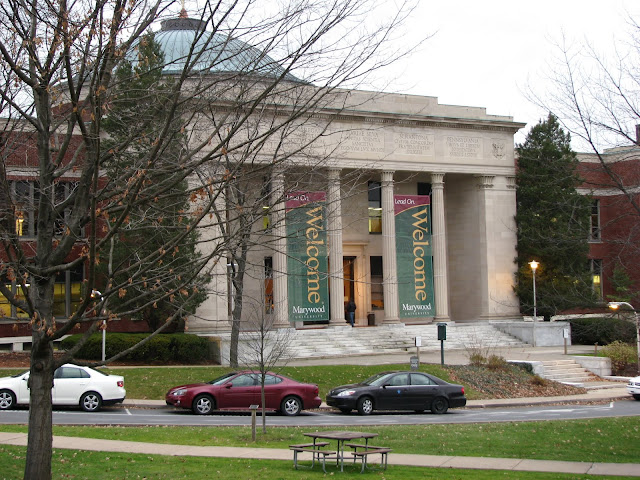 I should know the date.  I don't.  I do recall that it was mid December, thirty years ago.  The occasion?  My first time on the radio.

I was a freshman at Marywood.  The college station, WVMW 91.5 FM, a whopping ten watts of power, didn't allow first semester freshmen on the air.  I found a way to weasel myself behind the microphone.

The radio station is in the same place as it was in my day-- the lower level of the Learning Resources Center.  The doors to the radio station can't be seen in this shot.  They're off to the right.  That's the tower and antenna on the roof. 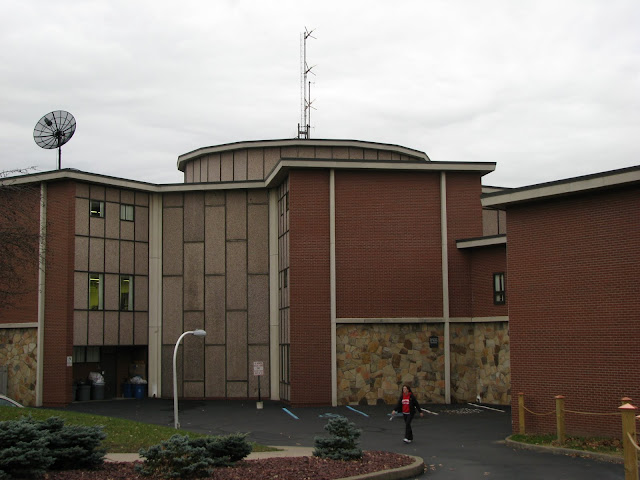 Back then, the station broadcast from 1:00 PM to 1:00 AM, but a few times a year, WVMW would have "rock weekends."  It meant broadcasting around the clock.  Extra shifts.  They needed warm bodies.  I had one.  Barely.  I took the shot and asked for a shift.  I got one.

If memory serves, I was on 2:30 AM to 4:00 AM on a Sunday morning.  It was part of a three hour shift with an upperclassmen, Mary Jo Toole.  She was nice enough to agree to her going solo for the first half of the shift.  I'd go solo for the remainder.  That was against common "rock weekend" practice, which was for jocks to work together.  It was the equivalent of talking your dad into taking the training wheels off the bicycle before you were really ready.

My first song?  "The Stranger" by Billy Joel.  It was also the way I ended my last shift at WVMW in January 1983, but that's another story.  I do remember playing something from Aerosmith that first morning, plus Elton John's version of "Lucy in the Sky" and Rod Stewart's "Hot Legs."  The time flew by.

I had everything mapped out in my head, but it's a different world when the microphone is hot.  I wasn't horrible.  Slightly better than horrible would be more appropriate.  I did have a cassette of the show.  I trashed it several years ago.

Spending time at the college radio station was something you had to do.  At times, it was a chore.  Most of the time, it was great fun.  Being all alone in a little room can wear you down.  On the other hand, we had a lot of freedom back in the day, and I got to play stuff I liked.  Radio is a great medium.

It's hard to believe it's been thirty years already. 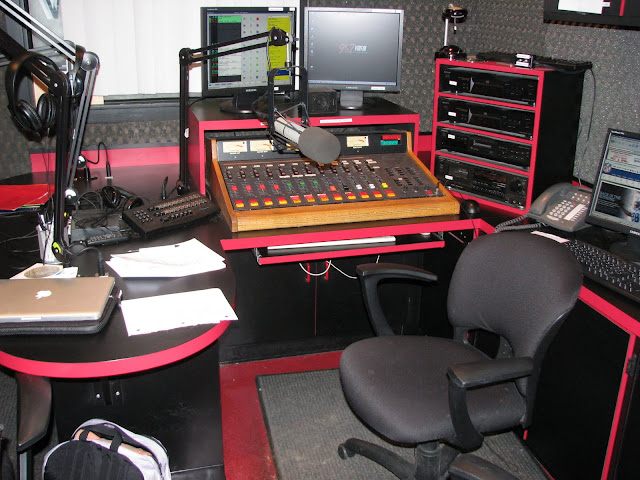 I stopped by back on December 2nd, while I was on my to Marywood's Christmas tree lighting.  The studio is in the same place, but it's totally different.  I wish I had a "before and after" picture for you, but I didn't take any pictures back then.

Like most radio stations, everything's computerized.  No records.  No turntables.  No reel to reel machines.  No tape cartridges or the machines to play them.  This is a nice looking operation.

I should explain the "three years" thing.  I took a lot of credits my first two years, and I took courses every summer.  I had to take only a few credits in each of my senior year semesters.  Marywood booted me from the list of full time students, and I was classified as a part timer.  By then, I was putting in a lot of hours at WARM.  The college had a requirement that to get credit, you had to put in 15 hours at the college TV station, 15 hours at the radio station, and 15 hours mixed any way you liked.  I worked a ton of WVMW hours during Christmas break in December 1982 and January 1983.  I got my hours and signed off for the last time in early '83.  There were plenty of chances to do some fill in work before I graduated.  I politiely declined.  It was time to move on.

My favorite graduation day moment took place here, at the radio station.  I got my diploma.  The ceremony was over.  I was walking back to my car when I decided to stop at WVMW one last time.  I chatted with a few underclassmen, including Al Piela.  Al was and is a good guy.  He worked at Rock 107 for a long time.  He's now selling real estate in Ocean City, MD and doing traffic reports for some Washington, D.C. radio and television stations.  Anyway, after a brief chat, I said, "Well, I have to go now."  Al seranaded me out the door by singing "Go Now" by the Moody Blues.

>>> UPDATE:    A source at Marywood sent me the photo you see below.  Some of what you see here was installed after my 1983 departure, but it gives you an idea of what the old studio looked like.

The small white box near the back of the chair is a tape cartridge machine, and you can see one of the reel-to-reel recorder/players to the left of that.  I don't think they even make those any more. 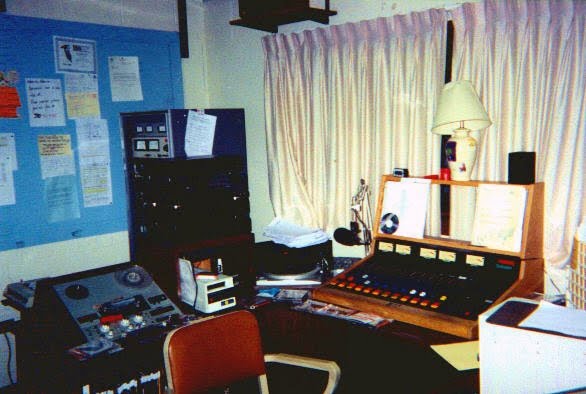