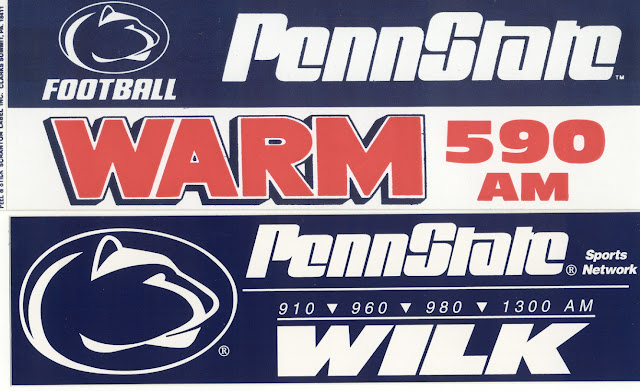 WARM used to have Penn State Football.  WILK has it now.

Here's what I remember from my radio days.  Penn State Football was an easy sell.  Advertisers all wanted to get on board.  Remember, this was the early 80's.  ESPN was still in its infancy.  We saw a couple games on TV on the weekends, and that was it for college football.  Back then, it was a sport made for radio.

On the other hand, the Philadelphia Eagles were on TV every Sunday.  WARM also had the Eagles, which no one wanted to buy.  The sales department cooked up one of those plans where you had to buy the Eagles to get a shot at a Penn State package.

The other thing I remember was when PSU contracted with an outside company to market its games.  They had stations where they wanted them.  In order to get football games, you had to air selected men's and women's basketball games.  At the time, the basketball program wasn't very good, and the games were unlistenable-- an audience killer.  Utterly horrible radio.  If that wasn't enough, you had to swallow long and tedious  pre and post game shows for all sports.

Speaking of horrible radio, a local sneaker retailer was always a big Penn State football sponsor.  Don't ask how it fell to me, but I had to voice the commercial one season.  It was 60 seconds of copy that I had to cram into 30.  It took several tries, but I did it.  Amazingly enough, the company remains in business today.

I was long gone by the time the PSU package moved to WILK, but I suspect very few tears were shed at WARM.  The station was sorry to lose football, but happy to be rid of audience killing basketball.

WARM clearly did a better job with the bumper stickers.  The station logo popped rather than blend in, even though the WARM logo leaves a lot to be desired.

WILK had four frequencies at the time this sticker was printed.  AM 960, near Mount Pocono, is now in the hands of another company.  It simulcasts a station from Stroudsburg.  WILK still has four frequencies, and one of them is FM 103.1

Thanks to the proliferation of college football games on broadcast and cable, the Penn State game is always on, somewhere.  I wonder if radio still has the same draw.