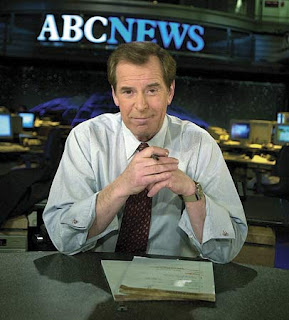 So what did I do with my time off?  The answer is "not much" and I'm not complaining.

First, there was plenty of sleep.  Toss in a few drives and and some bad photography, and that's about it.

I also read a lot.  I completed "Peter Jennings:  A Reporter's Life."  Tomorrow marks the fifth anniversary of Jennings' passing from lung cancer.  My reading of the book and the anniversary are not related.  My week off finally gave me the time I needed to finish the book.

We always learn so much about a person after their death.  While it helps celebrate their life, it's also unfortunate.  We could have appreciated them so much more when they were living.  We all knew of Jennings' career track-- Canada, ABC anchor, foreign correspondent, London anchor, and finally solo anchor of what was then called "World News Tonight."  The book was fascinating.  I learned how Jennings fought for more foreign coverage, and to get more documentaries on the air.  You also become more aware of what made him tick.  He had his share of struggles, just like the rest of us.

ABC's overnight news frequently runs time capsule pieces featuring some of Jennings' work.  Even more clips are on You Tube.   As I watch that video now, I'm struck at how smooth and confident Jennings appeared.  I guess I didn't fully grasp it when Jennings was around because he was there every night.  You took his professionalism and demeanor for granted.

I also miss that big and bright ABC newsroom set.  I can't say I'm a fan of that shoe box look that ABC adopted for the Charles Gibson and Diane Sawyer broadcasts.

Even if you're not a TV news junkie, you'll enjoy the book.