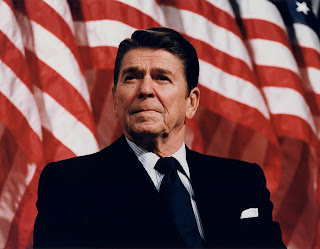 Yesterday marked the 100th anniversary of the birth of Ronald Reagan.

There were Reagan tributes all over television this past weekend.  ABC News did a short piece on how today's Republican politicians are trying to channel the charisma of the 40th president.  I rebroadcast it on Newswatch 16 Sunday Morning.

Today's blog is politically neutral.  I'm not saying whether I agree or disagree with Reagan's policies, but while watching the video over the weekend, I was reminded of why Reagan was called the Great Communicator.  He was such a commanding presence in front of a camera and behind a microphone.  The man could deliver a line.  Yes, he was a Hollywood actor and some might argue that his presidency was just another role.  However, you can't dispute the fact that Ronald Reagan had the gift.  In a piece in the NY Daily News, former Tennessee senator (and actor) Fred Thompson wrote that Reagan said he succeeded not because he was a great communicator.  Rather, it was because he communicated great things.

FDR led a nation through war.  JFK helped inspire.  LBJ tried to talk us through years of turmoil.  Nixon will be remembered for his resignation speech, and the "I'm not a crook" news conference.  I can still see Jimmy Carter, in the White House, in his sweater telling us to save energy.  Bush 43 had to get us through 9/11.  Reagan?  There a few speeches that come to mind.  "Mr. Gorbachev, tear down this wall!"  is at the top of the list.  There was his address to the nation after the Challenger explosion, and his apology for the Iran/Contra scandal.  Then, there was the "Are you better off than you were four years ago?" line in the Carter debate.  And, how he wouldn't hold "youth and inexperience" against Walter Mondale four years later.

In my lifetime, Ronald Reagan has to be responsible for more "moments" than any other president.
AT 12:00 AM