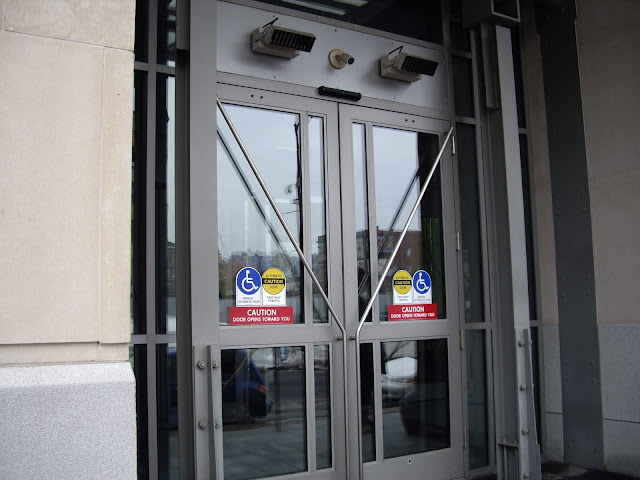 Above is one set of doors at the Federal Courthouse in downtown Scranton.  They are the doors you and I would use to enter the building.

Former Luzerne County Judge and accused thief Mark Ciavarella got to use a secured back door when he entered the courthouse Monday morning.  It is a door a privileged few get to use, and I asked the head U.S. Marshal for Scranton why.

See if you can follow this.  The U.S. Marshal explained he and his office are officially neutral.  Even though he works for the government, he says he favors neither prosecution nor defense.

The Marshal added that his office frequently receives back door requests from defendants who are not in custody, and most are refused.

What made Ciavarella different?  The U.S. Marshal's office is in charge of security for the building.  They remembered the angry mob that greeted Ciavarella and co-defendant Michael Conahan during an appearance several months ago.  I inferred that the U.S. Marshal's office wouldn't be happy if there was an incident on government property-- an assault or worse, and what if an innocent bystander was hurt in the process?

By the way, the guy in charge seemed surprised someone would actually come knocking on his door to ask questions.  Hey, it's what I do.  After the initial surprise wore off, we had a nice talk about how things transpired yesterday morning.  Note to people who make controversial decisions:  Don't run.  Don't hide.  I don't bite unless you make me.  All you have to do is simply explain what you did and why.  That's all.  It's not hard.  If you truly believe in what you did, you should have no problem outlining the reasons.  I guarantee that you'll get a fair shake.

It would be very easy to tell Ciavarella & Co. to use the front door, just like everyone else, and I would be inclined to tell him that if I was in in charge.

However, you do have to look at this from all sides, and you have to put yourself in the shoes of the people who make the decisions.

A lack of sympathy for the man who allegedly unjustly sent kids away while lining his pockets is understandable.  On the other hand, it's easy to have a little sympathy for the individuals who have the responsibility of keeping everyone safe.  That includes lawyers, judges, jurors, spectators, people who work in that building, members of the media, and the defendant.