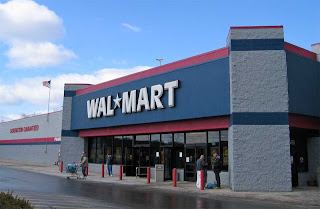 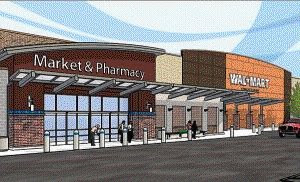 In the past, I've written about the change in architecture at McDonald's.  The double sloped roof of the 70's is gone, replaced with a hip and trendy look.  I was sorry to see the old design go, and from what I read on the internet, a lot of people felt the same way.

I shop at Walmart.  I admit that freely.  It's not known as the friendliest company in the world, but it has what I want.  It's cheap.  It's always open.  As James Taylor would say, "that's why I'm here."

Walmart has also gone a transformation in the last couple years.  I tried hard, but I couldn't find anyone with the warm fuzzies over the look on the left-- bright colors, big sign, big squares.  The new look is on the right, even though the sketch still has the old logo.  Earth tones, curves, friendlier, more inviting, less menacing.

The outside might have changed, and even the inside has been modified somewhat.  Aisles are wider.   Health & beauty is closer to groceries.  Studies show people like the proximity.  Go figure. 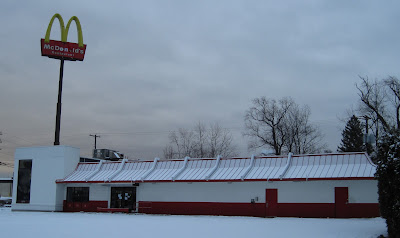 I'm trying to discover why people are more sentimental about McDonald's than Walmart.  Could it be because food is fun, and shopping at Walmart can be torture?   McDonald's has Happy Meals, and a clown, and games, and fried stuff, and Egg McMuffins.  Walmart has thirty cash registers, but only two people to run them, weekend crowds, and a lot of other issues.  I do respect that Walmart is America's largest retailer, so it must be doing something right.

I guess the bottom line is that it's tough to get emotionally attached to a big concrete box filled with cheap stuff, no matter what the exterior looks like.
AT 12:00 AM